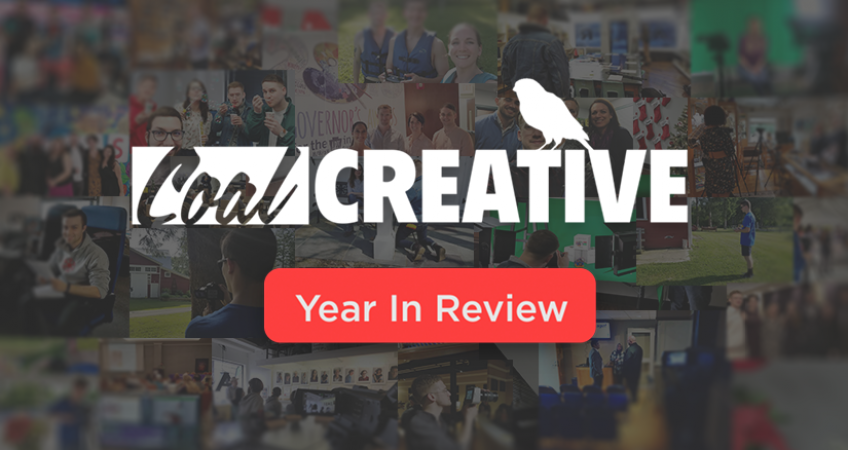 Starting 2018 with a new employee, 3 incredible interns and an array of exciting projects set the tone for a year of creativity, newness and growth. Claire (Business), Jonah (Video) and Sean (Graphic Design) jumped right in with the team as our spring interns and Jess Ross joined Coal Creative as our part-time project manager. The video boys kept busy shooting and editing live performances with Special Guest App. with us and Holly continued to do laps around NEPA by volunteering with the Girl Scouts in the THINK Center, participating in mock interviews at Misericordia and attending the 20 under 40 reception.

March was the “Month of Matt”, our lead Web / Graphic Designer had a busy month as we redesigned the website for local photographers Earl and Sedor, created a website for John Young Mortgage, created a website and a ground-up brand for Church Services Group (always love starting a brand from scratch) and started an exciting project with a local Historian about Harvey’s Lake.

The rest of the team kept up by filming and editing videos for the Wilkes Barre Chambers spotlight event, creating a video documentary “Taken By Pictures” with Jamie Smith of the Social Fabric Collective for an event, attending various networking events and more.

Aside from video shoots with Pinnacle Rehabilitation, the GWB Chamber of commerce and Special Guest App, April was a month of community involvement and networking.

Earlier in the year, we began laying the foundation for the United Way’s annual fundraiser and their “Day of Caring” Event”. We assisted all the way from planning to the events promotional materials (Print, Apparel, and Video) to participating in the event and attending the dinner. We also began the giant project of filming participants for the EPIC Awards (Over 30 local professionals!)

In June, we on-boarded 4 new Interns, Jason, Barry, Alex, and Sara, but that’s not all. The team was working together and all gears were turning as we churned out a new Website for AllOne Foundation, Live streamed the Epic Awards, shot a 101 Video for UGI, Kayaked the Susquehanna river filming for the Wyoming County Chamber of Commerce and more.

We felt the team spirit and took third place at the annual YP Kickball tourney, we felt pride as our Director of Business Development graduated leadership wilkes barre, and we felt terror as we saw Hereditary together at Wilkes Barre Movies 14 (Team building exercise, maybe?)

We were honored to be asked to create a documentary about the Art’s in Pennsylvania for the Governors Awards for the Arts. After garnering footage of Art Wow factors from all 67 PA Counties, We wrapped up this massive project and delivered it on time to a panel of art professionals in our area. We also snuck in a video shoot at Boote Studio for the United Way!

August brought to fruition, many big projects that the team clocked countless hours in for.
Along with doing the logo, we premiered the PA Arts Film at the Ritz Theatre in Scranton and attended the awards event as a team. We also attended the Pittston Annual dinner where our video was shown. All this while simultaneously gearing up to begin our work on Northeast Sight Services centennial videos and completing a video campaign for Visit Luzerne County.

Holly was PSU Convocation Speaker and Holly and Sam were a part of the Brewsterhout planning committee.

We were thrilled to once again help develop a new brand. The Sebelin brothers came to us with a need for a logo, website, photos, and billboard. We accepted the challenge! We also dove into video shoots for Northeast Sight Services.

In October, we continued getting footage of scenic Wyoming County, as well as shot with a new client, the boys from Coastal Ridge Homes. We went live with multiple websites, one being a logo/website combo. Perry’s Walnut Lane Farm and were the marketing sponsors of two local non-profit fundraisers: The Dress for Success Diamonds in the Woods event and Kiss theatres dancing stars of Wilkes Barre.

We also started shooting our own Testimonial Videos with some clients who we recently wrapped projects with, like Bill Jones of the United Way, Drew Kearney of Signallamp health among others. Our very own Holly gave 2 presentations on Creativity and Innovation at Wilkes U.

No breaks November began and didn’t slow down! We created videos for the GWB Chambers spotlight event on branding and innovation, we finished six Northeast Sight Services centennial videos with time to spare, live streamed a conference for the Alzheimer’s Association and the Kiss theatre dancing stars of Wilkes Barre event and photographed the Atzi hats crew. And that was all before Thanksgiving!

We ended the year strong by being nominated as the 2018 Best Places to Work by the Times Leader!

Holly judged FBLA students at WVW and we once again celebrated Friendsmas. Here’s to 2018 as we look forward to 2019.

Watch a video recap of our year!