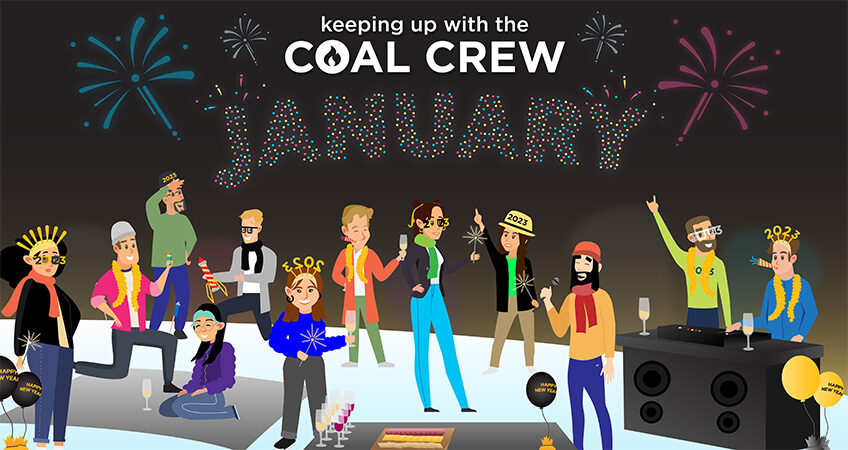 Keeping Up With The Coal Crew | January 2023

For the January 2023 edition of KUWTCC, we asked our team to be trend meteorologists — to don their blue raincoats and baseball caps and forge into the chaotic hurricane of Culture™ with Joe Snedeker-level abandon.

As always, we asked our posse to get creative. And because they’re as dependable as April showers and May flowers, they delivered. Let’s get into the Coal Crew’s predictions for 2023’s biggest trends — from an analog art boom to the re-introduction of dinosaurs to Earth’s ecosystem (…yeah).

Leaving Stress (And Splitting the Bill) in the Past

Alex Manganella, our Production Manager, predicts that people (himself included) will start kicking their smartphone addictions to tackle life’s many annoyances.

“Limiting screen time is so important. This year, I think we’ll see a big uptick in people going social media-free!”

But Alex isn’t just talking the talk — he’s walking the walk. He’s already kicked a few apps to the curb this year, and he has a few things to say about it:

“After removing these apps from my phone, I discovered that serenity is within reach. 2023 has been amazing so far!”

We’d like to remind readers that — depending on your notification settings — Venmo requests might also show up in your email inbox. In this case, be sure to send Gmail to the chopping block, too.

The Year of the Hobbit… And the Dinosaur?

Content Director extraordinaire Samantha Bucher also predicts that The Culture™ will take a turn toward the serene in 2023. Who else never responded to Venmo requests and turned out just fine? Hobbits.

“I’m seeing a lot of talk online about ‘Hobbity New Year,’ a cozy challenge for people to live more like hobbits in 2023. I’m expecting that by the end of the year, we’ll see Samuel O’Connel, our resident LOTR fanboy, serving Second Breakfast to the Crew and wearing lots of cloaks.”

You heard it here first — it’s the year of going barefoot, eating seven meals a day and hosting neighborhood garden parties (complete with plenty of ale and dancing). But, when you replace your rectangular front door with a round one, maybe make sure it’s fireproof.

“I can confirm that this is the year of the hobbit,” says Chief Middle Earth Historian (err, Creative Officer) Samuel. “But “cozy” is just the beginning. Although “there hasn’t been a dragon in these parts for a thousand years,” I predict science will use genetic cloning to bring back dinosaurs in 2023 and — dare I say — gold-loving, fire-breathing dragons.”

Some of our digital marketers-turned-fad forecasters predict that instead of embracing something new, the world will seek comfort from beloved trends of yore.

“While I’m not going to get my hopes up, I’m manifesting that this will be the year that Vine makes a comeback,” says Jesse Macko, our Campaign Manager. Vine walked so TikTok could run, but we’re looking forward to a revival of the six-second masterpiece.

Lead Web Developer Matt Simoncavage also has his sights set on a throwback — and an ambitious rebrand.

“A few years ago, some of us used to do pushups every day in the office. This is the year that comes back in a big way. Everyone at Coal. 100 pushups a day. Every day. By 2024, we’ll be ready to rebrand as Swole Creative.”

Those of us that do embrace Matt’s pushup challenge will be spending more time than usual staring down at our hands (good form is paramount, after all), and Video Production Coordinator Jay Nguyen predicts that 2023 will usher in a glamorous throwback that will make our hands a much more stimulating point of visual interest:

“I feel like some parts of ‘90s and Y2K fashion are here to stay in 2023. Personally, I would love to see more airbrushed nail designs! My mom is a nail technician, and I saw her work on a lot of airbrushing art in the early 2000s. You can get really creative with this style. I know that at my next appointment, I’ll be asking her to pull out all of the old stencils and airbrush paints!”

Matt, there are five letters in the word “swole,” and five fingernails on each hand — consider the gauntlet thrown.

The Coal Crew certainly didn’t skimp on tech-related predictions. But, Travis Antoniello (our Web Developer) suspects that 2023’s artistic pursuits will take a turn for the analog:

This is a good thing; we’ll need something to do once the second part of Travis’s prediction becomes a reality.

“At the same time, we’ll start seeing AI harnessed in ways that we never thought possible, rendering all of our jobs obsolete. It’s been real, y’all.”

But Will McHale, our Post-Production Manager, might miss out on those sound effects — at least until Apple releases his most anticipated product of 2023.

“This year, Apple will continue to push technology forward by introducing AirPods that plug directly into your phone so you won’t have to worry about constantly losing them.”

Move over, Apple Pay — this is innovation.

While we await the reappearance of dinosaurs and the introduction of dragons, CEO Holly Pilcavage predicts that the animal kingdom won’t let us down in the meantime.

“In 2023, everyone will hire Lucy Lemon to be their brand influencer. I mean everyone. Petsmart. Target. Disneyland. All of ‘em.”The world’s next up-and-coming four-legged influencer is currently accepting inquiries via her Instagram @LucyLemonPup. Don’t delay — her docket is going to fill up fast!