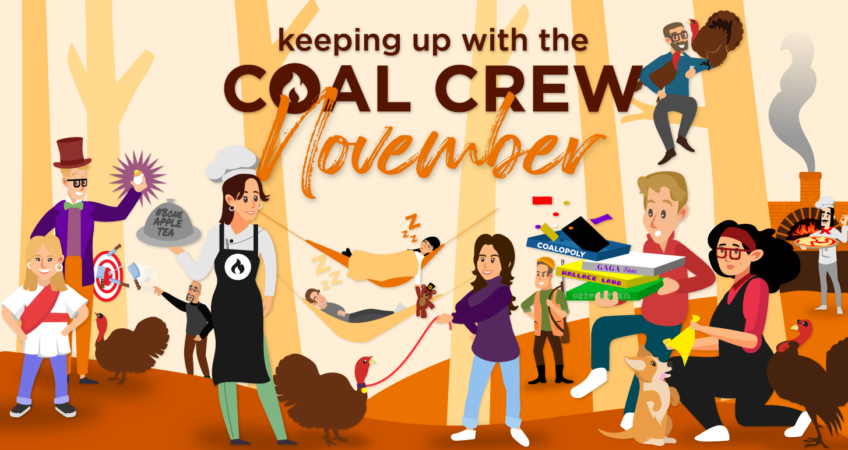 Keeping Up with the Coal Crew | November 2022

Have you been invited to yet another Friendsgiving potluck that, due to the collective fear of undercooking a 30-pound bird, will feature mostly desserts?

However you plan to spend Turkey Day 2022, we can almost guarantee that your ritual won’t be as bizarre as ours. At the very least, it won’t have nearly as many turkeys.

This month, we asked our team what they would bring to the Ultimate Coal Creative Office Friendsgiving. Chaos ensued.

Camaryn wants to turn the quintessential motif of Thanksgiving on its beak:

“I would bring a (live) turkey for each member of the Coal Crew so we can all have cute little pet turkeys.”

For those following along at home, that’s twelve turkeys. Twelve.

Is she compelled by turkeys’ unparalleled 270-degree field of vision? Does she agree with Benjamin Franklin’s assessment that the turkey is “a much more respectable bird [than a Bald Eagle]…a Bird of Courage?” Does she simply want to adorn a flock of turkeys with Samantha’s Thanksgiving-themed bandanas? (More to come on this.)

“I would bring an industrial-sized smoker to cook my brand new turkey that Camaryn gave me! That, and tons of maple wood to use in the smoker.

I would also bring a football. We should play football on Thanksgiving.”

While hipster dads everywhere rejoice, grandmothers weep—depending on who rules your roost (err, your kitchen) on Thanksgiving, turkey-smoking is either a welcome innovation or a mortal sin.

Football, however, isn’t a bad idea. Twelve marketers duking it out, shanking punts in an enclosed office space? What could go wrong?

Yet another eye turned toward innovation, Sam’s looking to makeover Thanksgiving’s most divisive hors d’oeuvre:

“Just like Wonka’s greatest achievement was the Everlasting Gobstopper, mine would be the Everlasting Deviled Egg and I would bring two for everyone. No golden ticket necessary.”

Is he planning on hunting down a bird with an impenetrable egg? Devising a white-hardening brine? Hosting a seance with the spirit of Roald Dahl and quizzing him on the science behind the Gobstopper?

We’re excited to find out—well, maybe not all of us.

Holly’s looking to reign in the chaos and baste this Coal Creative Office Friendsgiving with liquid class (and evict Sam’s cursed appetizer):

“I would hire twelve personal chefs, send them to everyone’s homes (or office desks), and have them serve a four-course meal. We’d have to forgo turkey because Camaryn gifted us all one and that would be kind of messed up??? Also, Sam’s eggs are not on the menu. #BoneAppleTea.”

For anyone looking to add a fifth course (of turkey) to their feast, Alex’s extension is 704.

To round out our Thanksgiving menu, Travis — our resident baker — is bringing the heat.

“I would bring a freshly baked brick oven pizza for each person, with their choice of toppings, cooked extra hot for a nice chewy crust and a little bit of char in my dream backyard pizza oven.”

Is anyone else’s mouth watering after that? We better go ask Holly if there’s room in next year’s budget for an office pizza oven.

6. Samatha’s Pursuit to Influence the Graphics

Pet-loving is very on-brand for Samantha. Maybe exerting power over the banner image is, too:

“I would make little Thanksgiving bandanas for everyone’s pups and cats so they could feel festive, too! (Did I just submit this as my answer so Sam would have to put animals in the graphic? You can’t prove anything.)”

Sam—you might have to table your deviled egg project.

Will knows what will happen once everyone is done feasting on a four-course meal, impenetrable deviled eggs, and morally questionable smoked turkey:

“I would bring bean bag chairs, sleeping bags, and weighted blankets for everyone to doze off into our post-turkey feast comas.”

But, let’s not forget the secret sauce of every successful sleepover: Who’s bringing the scratched Mean Girls DVD?

Jay, you better start shopping now—Tums (and its coral cousin, Pepto Bismol) fly off the shelves during the holiday season.

Matt, as usual, is leveraging his height for his own gain—and the pet turkeys’ protection.

“This is a photo from the future of me (the tree) providing refuge from Alex and his industrial smoker to the 11 surviving turkeys.”

But, when he’s not serving as a one-man turkey barracks (fun facts: turkeys nest on the ground, but sleep in trees!), he’ll be busy baking:

“Oh, and I guess I’d bring a pie or something.”

Looking to reinvigorate the gang after a turkey-fueled cat nap, Jesse is providing the evening’s entertainment:

“I’d bring a game! Nothing gets the energy back up and running like playing a game with some friends.”

Matt, unfortunately, must sit on the sidelines during game time—he’ll be busy protecting the 11 remaining turkeys.

Channeling the chaotic energy of a con, Mia’s contribution might just result in the weirdest-ever Coal Crew photo op:

“I would mail everyone costumes to wear during Friendsgiving so that we can recreate The Last Supper, Coal Creative style!”

Twelve Coal Crewmates, Twelve Apostles—the numbers add up. But, who will play The Messiah?

Those perching turkeys might not be so safe, after all. Jeremy’s digital (for now) rendering is conjuring up images from last month’s slasher roundup—move on, Jeremy!

Hopefully the only thing those knives will be cutting into are Matt’s pies.

All About Birds. Wild Turkey. https://www.allaboutbirds.org/guide/Wild_Turkey/lifehistory#

The Franklin Institute. Did Benjamin Franklin Want the National Bird to Be a Turkey? https://www.fi.edu/benjamin-franklin/franklin-national-bird