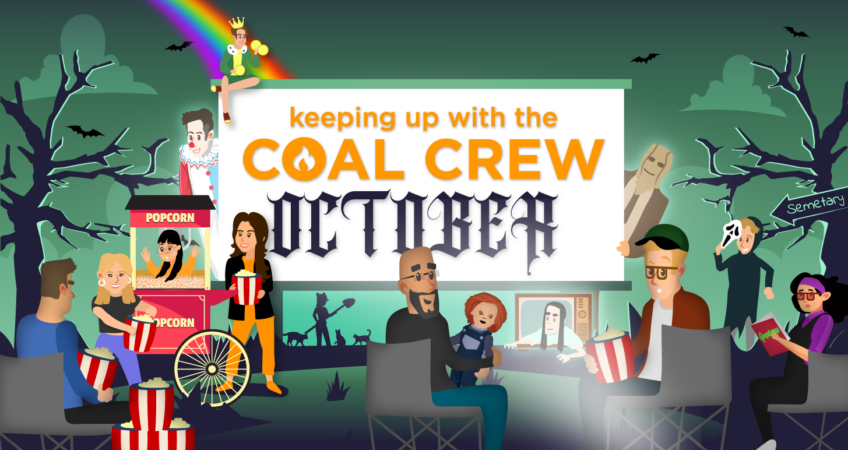 Keeping Up With The Coal Crew | October 2022

The sheer volume of horror movies we can pick this Halloween season feels horrifying in itself.

If you’re flailing and drowning in the abundance of horror flicks streaming platforms are pushing at us right now, we’ll throw you a lifeline, drag you out and help you clean off all the haunted swamp slime. Let’s whittle down your watchlist together.

The collective Coal Crew has a spectral preference when it comes to scary movies, from content made for children (or is it?) to the most gruesome chop-and-slop. We won’t discriminate between genres like suspense or thriller. We’ll give each one a Coal Creative Spooky Rating of one to five 🪨, which look like rock emojis.

One coal for the least scary and five for the most scary.

We got help from the crowd-sourced ScaryMeter.com to make this ranked list.

Admittedly, this one is not a movie at all. It’s a book, so it goes first. Sam​​antha doesn’t do scary movies, but we all know she’s a voracious reader. When she was a kid, this edition from the Goosebumps series really pecked at her.

“There was one story where a mean girl was cursed and her lips turned into a chicken beak,” she said. “For months after, I was so afraid of dry lips that I kept a Chapstick in my pocket at all times.”

Albeit not a horror movie, 9-year-old Sam hadn’t seen many scary battle scenes on screen. So when he sneaked into a friend’s house to watch this 2001 Oscar winner, it was mildly traumatic. I mean, who remembers Lurtz? 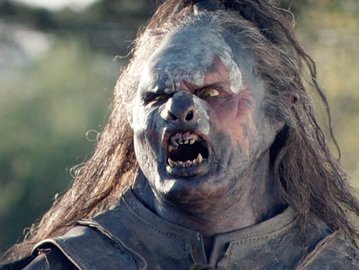 It’s another unofficial horror movie, but as a wee lad, Will, who was 4 years old when he saw it, found some characters memorably disturbing.

“It was not supposed to be a scary movie, but the scenes that depicted the wailing banshee and the death coach absolutely terrified me,” he said.

We suspect Alex is trying to tell us something with his pick — like, don’t look under his bed because that’s where he stashed the bodies. Or maybe this 1999 Disney Channel Original Movie actually messed with his head.

“A kids’ movie has no right being this terrifying,” he said. “But I’ll never be the same.”

Jesse doesn’t have a favorite scary movie, but “Scream” stands out as memorable.

“That movie as a whole is great and really makes you make sure your friends are who they say they are 😂,” he writes. “But the part when Tatum gets stuck in the garage door always makes me close my eyes lol.”

We’re noticing a theme. Kids remember scary movies forever. Jeremy picks it up here with the scariest movies for him, the original “Child’s Play” trilogy.

“My older half-sisters were teens at the time and let me watch horror movies with them,” he said. “I was afraid that Chucky could be hiding under any given bed or sofa, ready to stab, bite, grab, and/or slash me.”

That demonic little doll didn’t do any irreparable harm, apparently. Jeremy finished the series and even expanded his horror palate with other classics like “Friday the 13th.”

Jay doesn’t claim a favorite horror flick, but she did say the “House of Wax” premise — you know, killing people and preserving their bodies in wax as a public attraction (we’re not even sure this is biologically reasonable) — keeps her up at night.

“I don’t think I can ever visit a wax museum without thinking of what happened to my girl Paris Hilton. RIP, queen,” she said.

No horror movie list would be complete without the notable comic-turned-horror-maestro Jordan Peele. The 2019 flick about spooky doppelgangers stood out for Mia, perhaps because like all of us, she dreads the idea of meeting herself.

Spoiler alert “The part that freaked me out is finding out that Adelaide got switched with her doppelganger at the end,” Mia said.

“Just about all of ‘It’ scares me from start to finish, but mostly when Beverly Marsh can’t get the blood out of the sink,” Jon said. “It feels like a bad dream where I’m running but my legs weigh one million pounds.”

“When I was around five years old, my brother, who is five years older than me, forced me to watch ‘Halloween’ with him,” Camaryn said. “I was so horrified that I did not sleep for a solid month. It terrified me so bad that to this day, I refuse to watch scary movies.”

“My favorite horror movie of all time is definitely ‘The Strangers,’” Matt said, admitting he’s watched it more times than most people would consider healthy. “It’s just so well done. There’s barely any “movie magic” in the whole film and I just love how raw and real it is.”

“Truly one of the greats,” he said. “But let’s just all pretend the sequel doesn’t exist.”

Believe it or not, Coal Creative CEO Holly has probably seen more horror movies than any of us, thanks to Friday movie nights when she was little with her mom and sister. They walked to the former Videoland in Plains Twp. and snagged a bunch to watch with little regard for ratings.

“I’m going to go with ‘Pet Sematary,’” she said, confirming the odd spelling for Stephen King’s classic. “When Gage comes back from the dead on his little killing spree and hides under the bed with that knife cutting Jud’s ankle — I swear I haven’t trusted the same since.”

“I didn’t have my bed on a frame as a kid,” she said. “Even now my bed is currently on a frame my Dad built specifically for me that you can’t get under.

Oh boy. We just realized there’s lucky No. 13 of us on the Coal Team. If we suddenly stop responding to emails, either the elevator cables snapped and we plummeted to our deaths, or we’re all taking the day off to watch horror movies.

To wrap it up with the scariest movie you should watch this Halloween season, Travis gives us “The Ring.”

“As a kid, the thought of someone crawling out of the television set was terrifying — along with the idea of a video tape you can just accidentally see having the power to kill you,” he said, pausing for effect. “I’ve never looked at wells the same since.”