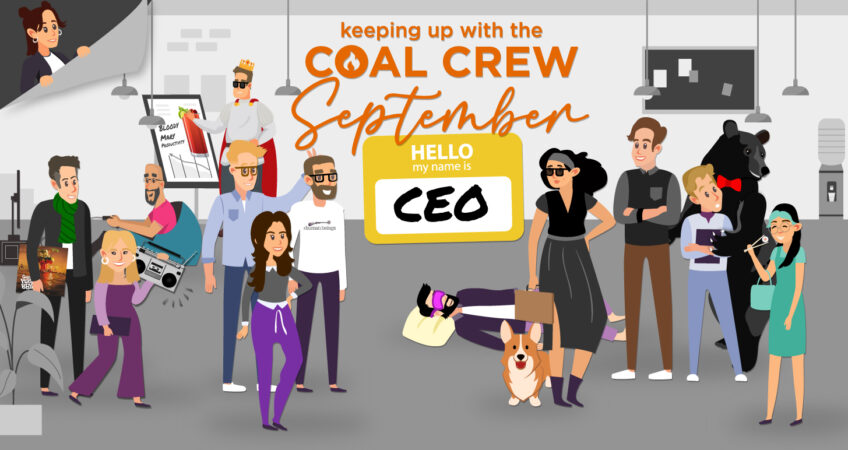 Keeping Up With The Coal Crew | September 2022

Here at Coal Creative, we have only a few rules that the members of the Coal Crew are absolutely required to follow: No sweatpants in the office, respond to emails within 24-hours, and never — under any circumstances make Jay cry.

These rules, enacted by CEO Holly K. Pilcavage offer a sneak peek at what is important to the company culture that makes Coal Creative the marketing firm it is today — and all three are rooted in respect.

Sweatpants, while obviously comfortable and in some rare cases stylish, don’t promote the ready  for anything attitude we’ve established here at Coal Creative. Secondly, there’s this stereotype that marketers are hard to reach and don’t respond in a timely fashion. Holly’s 24 hour rule demolished that notion. Of course, everyone slips up every once in a while, but for the most part, we do an excellent job following this rule.

We asked our team members what the first thing they would do if they woke up tomorrow as the CEO of Coal Creative. Stay tuned as some of these ideas and innovations may (or definitely may not) be coming soon.

Dog lover and design/content maestro Samantha Bucher noted that “As CEO, the very first thing I would do is turn half the office into a dog park so our employees could bring our dogs to work.”  While she offers a potential con: “Productivity levels will drastically decrease, but I can guarantee that morale will double!” I think she is barking up the RIGHT tree.

Operations & Business Development Manager, Camaryn brought a level of defiance to her response that quite frankly, we don’t know what to do with. She simply noted “Sweatpants would be required.”

In Jesse’s version of heaven, the streets are paved with coffee beans — this is also true in Jesse’s version of Coal Creative — as his change would be, and I quote: “Starbucks in the office.” Whether he means he can just bring Starbucks coffee to the office (which it’s important to note he already does) or he wants to open a local location of the international franchise — we’ll let you decide.

In her first outing as a contributor to Keeping Up With the Coal Crew, our new Design Specialist, Mia brought the rock and roll with her suggestion of “blasting the stereo so we can jam!” We think you’re going to fit right in.

If you’ve gotten to this point, you might correctly be thinking: “I don’t think someone would need to be CEO to enact these changes,” buckle up because Alex has some courageous ideas that could but won’t change everything.

A new kind of energy

“If I were the CEO of Coal Creative we would immediately rebrand. New name: Nuclear Creative. I know we’re paying respect to our town’s early industrial roots, but that wouldn’t be a problem because we’d also immediately relocate to Berwick. It’s a longer commute, sure, but since we’d all have brand new company Teslas, I don’t see an issue. Also I’m changing my title to King. I’m the King of Nuclear Creative. And you’re not the king. You want the crown? Come get it, MATT!” before adding, “Or you could just do bloody Marys on Monday or something.”

Everyone has their own leadership style, but I think we can all agree Nuclear Creative has a nice ring to it. *sips bloody Mary*

Speakin’ of Matt, his version of Coal Creative? Monthly, mandatory WAR. “Mandatory battle of the Coal Creative bands between Noxen, The Human Beings, Toothless and Rosary Guild at the end of each month.” He ain’t wrong that Coal Creative is chalk full of incredible musicians (who are consistently putting out great music). “Also, Alex is fired.” Alex should know by now that Matt has never been one to bend the knee.

In a transparently far less dramatic suggestion, Jay (our resident snacker) has proclaimed she’d bring the noms to the office. “I’d hire a hibachi chef and build a kitchen right next to my desk, so they can toss zucchini at me while I work.” You do you, Jay — just please for all that is good in the world don’t cry.

This past summer we introduced Summer Fridays, an initiative where Coal Creative closes the office at 2 p.m. to allow our team to get outside and enjoy the warmer months while they can (an initiative we’re carrying through the rest of 2022). Post Production Manager, Will has introduced a concept that turns Summer Fridays on their head and scoops the inside looking for that beautiful golden honey.

“As the new CEO of Coal Creative, effective immediately the company will be observing the North American Black Bear Calendar, meaning all employees would enter hibernation in November and emerge sometime around late March each year.” There is so much to do before November to ensure survival, so I will be forced to be brief for the remainder of this edition of Keeping Up With the Coal Crew.

Travis has the flip side of the hibernation coin with his notion of, “mandatory nap time, one hour minimum. We will learn to harness our REM cycles to take our creativity to unmatched heights.”

When asked what he would do, Jon responded: “That’s easy. I’d declare the day of my ascension to be “Gorillaz Appreciation Day.” Everyone would be required to listen to the entire discography by the cartoon band Gorillaz. Together, we’d start with their platinum self-titled album, then work through “Demon Days,” then on through the monumental “Plastic Beach” from 2010, which features a brilliant collage of guest artists including Snoop Dogg, Lou Reed and Bobby Womack.” Jon, c’mon, buddy, winter is coming. “On second thought, everyone can listen through “Plastic Beach” and start over. From my perspective (and this may be a controversial opinion), Gorillaz really lost their shine after 2010.”

To round things out, perhaps the most game-changing idea of all from Project Manager, Jeremy.
“We’re a games and animation studio now. This was not a response to the prompt.” Yes, it was, my friend. Yes, it was.

Now as I type the final words, before collecting all my coziest socks in anticipation of our forthcoming hibernation, I feel important to note that if I was CEO for a day, I wouldn’t change a damn thing.

Keeping Up With the Coal Crew is a monthly blog that explores and challenges the creative minds of the team here at Coal Creative while simultaneously giving you a look at the magic of our company culture.