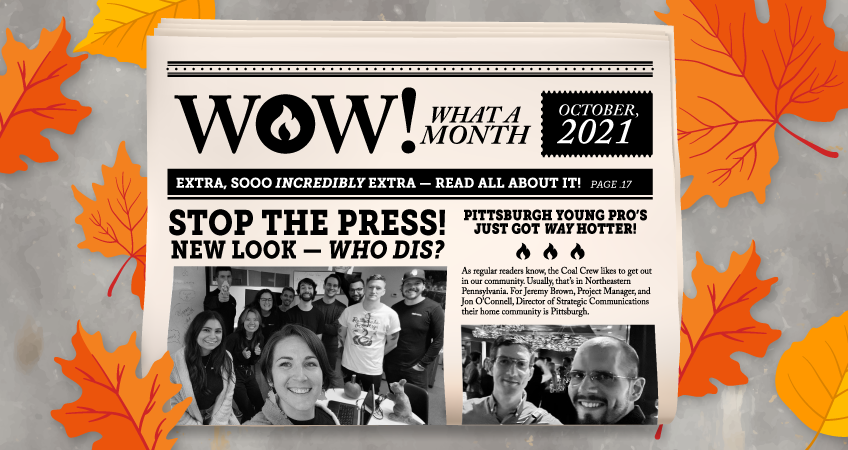 Posted by Adam In Blog,What A Month 0 Comments

The Coal Crew leaned into spooky season this month, with the ghosts of Halloween past and a cereal mascot-themed group costume. We hit an Oktoberfest and painted pumpkins. Most importantly, we started and finished some exciting projects. Let’s take a scary sojourn* into the month that was.

*Writers Note: Ok, fine. This recap isn’t frightening at all, but I’m really into the term “scary sojourn” and its use cases are very limited. Moving right along…

If you’ve been to a Wilkes-Barre City event recently, you may have seen members of the Coal Crew with cameras soaking in the scenes. We are working with the city on a series of tourism videos.

“The objective is to demonstrate all that Wilkes-Barre has to offer, whether it be the culture, economic opportunities, outdoor recreation, events, low cost of living, etc.,” said Alex Manganella, Production Manager.

Alex and the team have been collaborating with Mayor George C. Brown and Tyler Ryan, Executive Assistant to the Mayor, to showcase what makes Wilkes-Barre a great place to live.

Watch this space for the finished videos!

The Luzerne Foundation recognized retired President Charles Barber for his 21 years of service at the organization’s annual meeting on October 20. Charles retired in June after successfully growing the Luzerne Foundation’s market value from $2 million to more than $50 million.

In the lead-up to the meeting, Alex Manganella, Production Manager, and Jay Nguyen, Video Specialist, secretly created a video to recognize Charles.

“This is a fun type of video. In order to honor Charles Barber, Jay and I had the opportunity to interview various friends, family and peers of his,” said Alex. “It’s a unique position to be in. By the end of production, we felt like we knew him personally — without ever having met him.”

It’s always great to have students visit us in the office. We were lucky enough to have two different students shadow the team recently. Samuel Savistski, a King’s College freshman, spent two weeks shadowing the Coal Crew. Samuel has an interest in design and computer science. He had a chance to sit down with most of us to learn about our backgrounds and roles at Coal.

Gina Galada from MMI Prep shadowed the team for a day. She came with a general interest in marketing and left with some insight into the field.

Thanks to both of you for your interest in Coal Creative and good luck with your studies.

Creative Director Sam O’Connell and Director of Strategic Communications Jon O’Connell A.K.A the Brothers O’Connell, hosted a branding webinar for Biz Sugar Live on October 27.  The session included the ingredients of a successful marketing campaign. If you missed it — or loved it so much you want to watch again — you can view the presentation here.

The current Leadership Northeast class, which includes our very own Operations & Business Development Manager Camaryn Lokuta, held its second monthly event on October 7. The session was called the Vision and Mission program.

As regular readers know, the Coal Crew likes to get out in our community. Usually, that’s in Northeastern Pennsylvania. For Jeremy Brown, Project Manager, and Jon O’Connell, Director of Strategic Communications their home community is Pittsburgh. The pair attended the 4th Annual Pittsburgh Young Professionals Day celebration on October 1.

The City of Wilkes-Barre hosted its 150th birthday and Oktoberfest on the first Saturday of the month. Our CEO Holly K. Pilcavage  and Creative Director Sam O’Connell joined the celebration, which included live music, food trucks and local breweries.

Diamonds in the Woods Helps Dress for Success Luzerne County

We had the opportunity to sponsor and attend Dress For Success Luzerne County’s annual Diamond in the Woods event. The lovely evening at the Woodlands benefited the empowering work that Dress for Success does for women in our area.

Coal was represented by Sam O’Connell, Creative Director, Holly K. Pilcavage, CEO and Camaryn Lokuta, Operations & Business Development Manager. No one from the Coal delegation was lucky enough to find the real diamond that Simon and Co. Jewelers placed in a single glass of champagne. I guess there’s always next year!

The Greater Wyoming Valley Chamber of Commerce welcomed state and local lawmakers to their Legislative Forum on October 8. Holly K. Pilcavage, CEO and Camaryn Lokuta, Operations & Business Development Manager, were among the attendees at the Westmoreland Club. The legislators discussed various topics impacting our local business community, education and infrastructure.

At the end of the day on October 8, a few Coal Creative folks made the short trip from our office to the Intermodal for the 12th Annual Brewsterhout Rooftop Party. We are proud to sponsor this fundraiser for the Osterhout Free Library. Coal Creative CEO Holly K. Pilcavage, Operations & Business Development Manager Camaryn Lokuta, Production Manager Alex Manganella and Creative Director Sam O’Connell enjoyed local brews and food with a view.

Coal Creative, the Rainbow Alliance and the NEPA Pride Project collaborated for the second year of the Be Kind initiative. The group distributed 125 “Be Kind” yard signs designed to spread kindness and inspire meaningful conversations. Volunteers handed out signs at the Osterhout Free Library on October 16. The volunteers included Jesse Macko, Holly K. Pilcavage and Sam O’Connell, who double as Coal Creative employees and Rainbow Alliance board members.

NEPA Creative held its final meetup of the year at Kirby Park on October 19. Attendees embraced the season by painting pumpkins as the sun set. The chilly fall air and complete darkness before 7 PM made it clear that outdoor meetups need to be put on ice for the next few months.

The darkness enhanced the second breakout, which was a spooky script reading. The kids and scaredy cat adults who came for the pumpkin art, bowed out before the cell-phone lit reading of the “Stranger Things” pilot.

A group from the Greater Wyoming Valley Chamber of Commerce Young Professional Network got to experience the peace and connection of The Bench Project — our new collaborator. The Young Professionals met at Twin Oaks Farm in Shavertown on October 22 to walk the three-mile Bench Trail. Each of the 31 unique benches on the property has a weatherproof bag with a journal and pen. Visitors are invited to sit, reflect, read and write.

Big things are happening for The Bench Project. Visit their website for more information.

Happy Birthday to our Post Production Manager Will McHale. Will celebrated another trip around the sun on October 14. Happy Birthday, Will. We hope you had a great one!