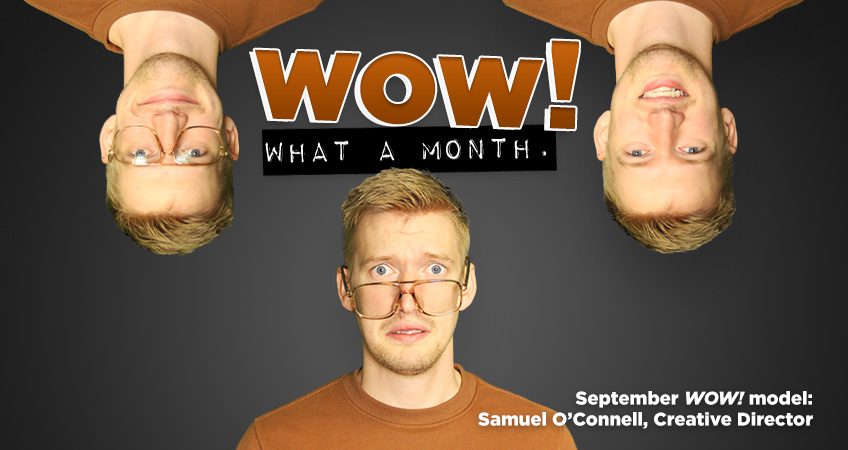 Wow, doesn’t it feel like September just flew by? We’ve been keeping super busy at Coal Creative, and this past month has been full of fun projects, exciting events, and quality bonding time with the team.

The video team has been busier than ever, but we managed to chat with the boys about what they’ve been working on lately. “We recently filmed and are currently in the editing phase of The Masked Wrestler, a program that will stream on IWTV,” says Will, our Post-Production Manager. “We got to witness a lot of high-flying and hard-hitting wrestling action from up close, and it was definitely one of the more exciting shoots in recent months. Alex got to sneak into the ring between matches and I think I overheard him talking about what his new wrestling persona will be.”

Other exciting projects the video team worked on this month include:

We also checked in with the web team to touch base on what they’ve been working on lately. “This past month I’ve had the opportunity to work closely with the United Way of Wyoming Valley to help them revamp their website,” says Travis, our Web Developer. “We’ve been replacing old photos throughout the site, adding resources and updating pages to get it ready for their 2020 campaign. It’s a good feeling being able to support the United Way and, in effect, directly support our community!”

In addition to revamping their site, we also helped launch the United Way of Wyoming Valley’s 2020 Campaign, chaired by Rosenn Jenkins & Greenwald’s own Attorney Paul Rushton!

Another exciting moment for the web team in September: after almost 7 months of working behind the scenes, the Boost Business NEPA landing page was soft launched! Everything our web team produces is nothing short of incredible, and we couldn’t be more thankful for their hard work.

Internally, our own Samantha Bucher was promoted to Content Manager & Design Specialist! In her new role, Samantha will be communicating more actively with our clients and keeping larger projects on task, while still designing a variety of projects. Congratulations, Samantha! We’re looking forward to seeing what’s in store for you as you continue your journey with Coal Creative.

With so much going on this month, we knew we needed to be more mindful and create a plan to manage any stress our team may be feeling. Luckily, we were joined by the awesome team over at studio BE for two virtual courses centered around mindfulness, stress, and anchoring. (If you aren’t familiar with studio BE, let us give you the scoop- studio BE, based out of The Accelerator in Downtown Wilkes-Barre, offers mindfulness training programs to companies, non-profits, and individuals.) During the virtual workshops, we learned about the science behind mindfulness and how we can apply it in our everyday lives.

Members of the Coal team also attended several socially-distanced events this month, including the Osterhout Summer’s End Seafest, the Friedman JCC Kluger Tribute Gala, and the Scranton Fringe Festival (which we sponsored!). We were also proud to sponsor the 2020 Steamtown Music Awards, an event we hold near and dear to our hearts and look forward to each year.

To close out the month, the Coal team attended the Greater Wilkes-Barre Chamber’s 5th Annual 2020 Young Professionals Awards! The event took place at the Garden Drive-In in Hunlock Creek and featured some of the best and brightest young talent across NEPA. Our very own Samuel O’Connell, Creative Director at Coal, was honored with the 2020 Cultural Ambassador award, a proud moment for our team! To close out the evening, attendees enjoyed a special showing of blackhole., the short film produced by Coallab Productions.

It has sure been quite a month for the Coal team, but we couldn’t be more thankful for the opportunities to work on projects we’re passionate about.

See you next month!