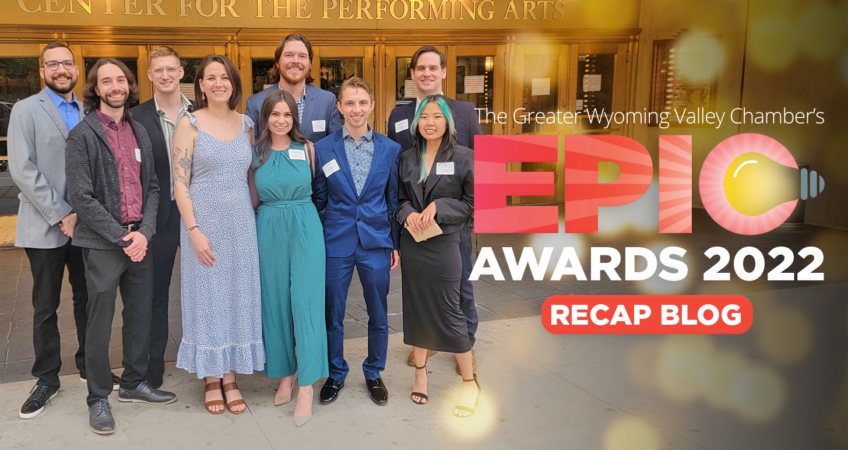 While it might be cliche to say the 2022 EPIC Awards made us laugh and cry, it would also be accurate. The Greater Wyoming Valley Chamber of Commerce held its annual EPIC Awards on Tuesday, May 24, and the evening delivered the full spectrum of emotion.

For each recipient of the Extraordinary People Inspiring Community Awards there was a musical performance and a video. The videos — which the Coal Creative video team produced — featured interviews with friends, family and colleagues of the winners.

Dan Kimbrough received the new Diversity, Equality and Inclusion (DEI) Champion Award. His young son Luca presented the award. A chorus of “aww” burst from the F. M. Kirby Center seats when Luca promised to always be there when his dad won awards, even if he had to drive in from college.

“His son had the biggest smile and beamed with so much love,” said Jay Nguyen, Video Specialist.

Post-Production Manager Will McHale has a personal connection to the winner.

“Dan was my video professor at Misericordia University, where he gave me my first formal training in the world of video production,” Will McHale. “Getting the opportunity for our team to create videos to recognize his accomplishments, along with the accomplishments of the other recipients, was truly a proud moment for me personally.”

Jay and Will worked alongside Alex Manganella and Sam O’Connell to interview nearly 50 people and produce six videos.

Working behind the scenes, Alex has noticed a bit of a pipeline for EPIC Award winners.

“In our many years doing these videos, you see a pattern in that one year somebody is asked to speak on the behalf of their friend, then the next year they’re the one being nominated,” said  Alex, our Production Manager. “The networks you see at these events illustrate the saying ‘a rising tide lifts all boats.’”

Sam, our chief creative officer, has been working on EPIC videos for five years. He’s also seen the 2022 videos a lot — that’s the deal with video editing. Even though they’re old news, there’s something special about EPIC Awards night.

“When we produce these videos, you watch them over and over again throughout the process,” Sam said. “But there is something about the energy in the room and hearing the honorees speak after the videos play that ‘hits different’ — as the kids say.”

Here are the 2022 EPIC Award winners. Congratulations, everyone!

Innovators of the Year Award

This award is presented to an individual or individuals with demonstrated ability to drive innovation within our region.

Volunteer of the Year Award

The Volunteer of the Year Award is sponsored by Community Bank, N.A. It honors an individual whose voluntary support of community-based and nonprofit organizations in the Greater Wilkes-Barre region not only allows these entities to better meet their mission but also attract and retain other volunteers.

PNC sponsored the Diversity, Equality and Inclusion Champion Award. This award recognizes an individual who strives to prioritize diversity, equity and inclusion in their business or profession, has devoted time and energy to the DEI community in a meaningful way, has given back to the community, and, most especially, has generously assisted other minority groups in attaining their full potential.

The ATHENA Award, which is sponsored by Riggs Asset Management, is presented to someone who has personified the highest level of professional excellence in her business or profession, has devoted time and energy to the community in a meaningful way, and, most especially, has generously assisted other women in attaining their full potential.

The EPIC Awards final honor of the evening was for community celebrations. These awards go to organizations that marked significant milestones this year. The honorees are: