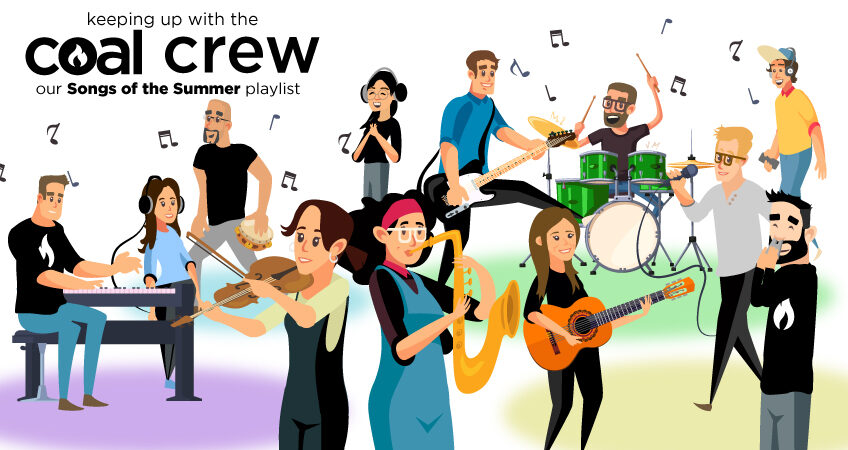 Keeping Up With the Coal Crew | June

Several Coal Creative team members are musicians, and the rest of us know a good song when we hear it. For June, we asked the Coal Crew for their songs of the summer, and turned it into a very coal playlist. Join us on a windows-down drive through the sunshine with the Songs of the Summer playlist on Spotify.

Production Manager Alex Manganella was the first to submit a song. He had such conviction in his submission that it had to go first.

“‘One Headlight’ by The Wallflowers’ is the only song that’s ever mattered. Any season. Any year. That’s the song. That’s my quote,” Alex proclaimed.

While Alex’s selection is right for every season and occasion, many others picked songs that are best enjoyed behind the wheel.

“My song of the summer is ‘Know That I Know’ by Lake Street Dive.” said Megan DeArmit, Advertising Manager. “This group creates some of my favorite jams and this song off their new(ish) album is one of their best! It makes me smile every time I hear it, and it’s great to listen to with the windows down on a sunny day.”

Lead Web Developer and Designer Matt Simoncavage picked ”The Mixed Tape” by Jack’s Mannequin, but he recommends the entire album.

“‘Everything in Transit’ by Jack’s Mannequin is not only my favorite summer album, but also my favorite album of all time. Written as a concept album about a summer in California, it really carries that feeling throughout, right down to the artwork. The single “The Mixed Tape” is a great place to start, but honestly just throw the whole album on and go for a drive with the windows down,” Matt said.

“Summer always feels full of hope – like it’s a time for planning, traveling, dreaming big, falling in love. ‘West Coast’ by Michael Stec reminds me of all of these feelings and thoughts. Growing up, I was convinced I was destined for the West Coast (cliches come true, the song says so!) Whenever I listen to it, I imagine driving down a long road with the big open sky in the distance with the song playing—windows down and sun shining of course.”

“For my song of the summer, I’m choosing ‘Radioactive’ by Kings of Leon.” Madison Kaminski, Design Specialist, said. “I typically have this song and — the album it’s off of — on repeat in my car throughout the summer. It’s a good upbeat track for a road trip playlist!”

Project Manager Jeremy Brown shared two songs that capture the summer feeling with “Radio” by Arcade High  and “Sunset” by The Midnight.

“Both songs have the energy of long summer days, along with an amount of wistfulness in knowing the moments will soon be gone,” Jeremy explained. “Also they’ve got synthy, late-80s vibes, which also plays into what summer sometimes feels like for me,” Jeremy said.

The energy from Jeremy’s songs carries into the next.

“I always think of the song of the summer as a pop hit that is catchy, dancey and flirts with being overplayed,”  Adam Roberts, Content Writer said “‘Levitating’ by Dua Lipa with Da Baby checks all the boxes for 2021.

Coal Creative’s Content Manager & Design Specialist Samantha Bucher brings our playlist back to the car with another nostalgic song.

“I first listened to ‘Rip RnR’ by JR JR on a summer road trip, so every time I listen to it, I’m transported back to that memory of the sun on my face and the wind rushing through the car windows. It’s a bit of a bittersweet song that makes me feel excited and nostalgic at the same time,” Samantha explained.

Will McHale, Post Production Manager, has a relaxing offering as well as three albums worth spinning this summer.

Then, Jay Nguyen, Video Specialist, makes her “Keeping up with the Coal Crew” debut. Jay’s submission transports her to a beachside hammock, which is exactly where we want to go after all that road tripping.

“Last summer, I got into pen-paling as a way to pass time during the pandemic,” Jay said. “I made a friend from Hanoi, Vietnam and we exchanged letters for months! We talked about our favorite music and one song she recommended is ‘Tú’ by maye. It’s a very pretty song that makes me want to laze around in a hammock by the beach while drinking sugarcane juice and eating dragon fruit!”

“I have put A LOT of thought into what song to pick, but I have to go with ‘Have You Ever Seen the Rain’ by Creedence Clearwater Revival,” Camaryn explained. “My brother plays the guitar. This song is always a go-to, when my whole family sits around and sings. Everytime I hear this song, it takes me back to those summer nights!”

Sam O’Connell, Creative Director, was inspired by his own project and one of his favorite bands’ new material.

“During the pandemic, while writing a personal project based in the swingin’ sixties — I found myself totally swept up by the music of that era. And as fate would have it, my favorite modern band, Lord Huron, released an album full of tracks inspired by and recorded within a retro studio from that era. My submission for the summer playlist is ‘Not Dead Yet’ from the album ‘Long Lost’, said Sam.

We’ll close out our playlist with Coal’s Web Developer Travis Antoniello’s selection: ‘Party in the USA’ by Miley Cyrus.

No judgement here, Travis. It’s summer and this playlist is here to help us all stay coal!