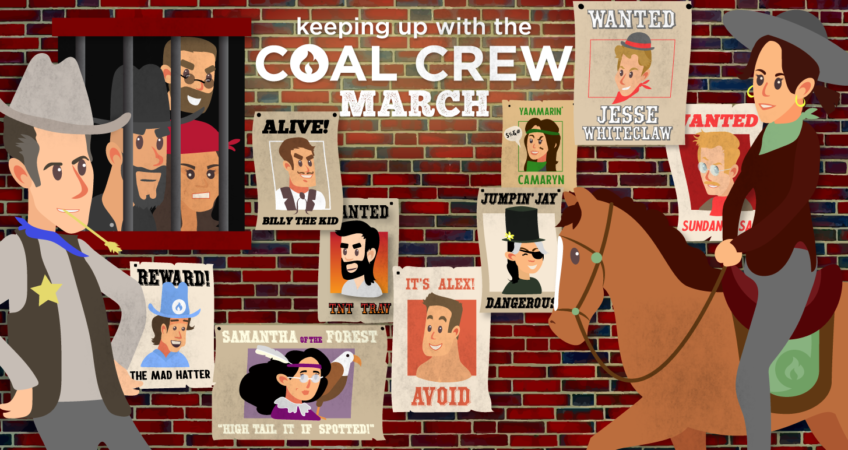 The following is a police blotter of crimes the members of the Coal Crew have definitely not committed — but if they did — we wouldn’t be all that surprised. Many of the “crimes” were dreamed up by the “suspects” themselves while others were a team effort. There are a few that I made up. That’s what you get for not sending your answers to Keeping up with the Coal Crew.

All suspects are innocent unless someone actually confessed to a crime for this work blog. I guess anything is possible — but for disclaimer purposes — we’re all innocent and these crimes are completely fictional.

Holly K. Pilcavage, 31 ½, of Wilkes-Barre, was charged with attempted burglary. The suspect was reportedly given a key to Wilkes-Barre city by Mayor George C. Brown. The suspect seems to believe the ceremonial and cartoonishly large novelty key works in all city doors. Officers confirmed this is false. Pilcavage was apprehended while attempting to enter the Osterhout Public Library. The suspect stated she was there because a few coworkers convinced her to use the key to the city to secure leftover libations from the Brewsterhout fundraiser. Additional suspects have not been identified.

Jeremy Brown, of Pittsburgh, has been charged with disturbing the peace after multiple complaints from neighbors about his 4:30 a.m. alarm. The suspect reported he “lives a very regimented lifestyle” as he was placed in the back of a cruiser.

Jay Nguyen, 22 , of Scranton, has been charged with trespassing. The suspect claims she accidentally fell asleep at Mattress Firm while browsing. Employees discovered the suspect in a “blanket burrito” when opening the store.

Samantha Bucher was charged with one count of breaking and entering, two counts of destruction of property and one count of conspiring with exotic animals. Bucher was arrested at an unnamed zoo for attempting to “liberate the animals.” The suspect was found on the zoo grounds flanked by two kangaroos and three chimpanzees. The multi-species gang was attempting to break into additional zoo enclosures. Security called the police after the suspect was heard  yelling “to the puffin exhibit!” to her cohorts.

Upon investigation, police discovered Bucher, an experienced kickboxer, gained access to the kangaroo and chimpanzee enclosures with a mean jab, jab, frontkick, uppercut combo. It appears the suspect targeted the kangaroos for their kickboxing skills and the chimps for their opposable thumbs. Bucher is a known puffin enthusiast, going back decades.

Matt Simoncavage was apprehended at a logging site after chaining himself to a tree he claimed to be his uncle. Simoncavage, who identified himself as a fellow tree, stated he was only protecting his family. Simoncavage will be arraigned on trespassing and impersonating deciduous hardwoods. He insisted the loggers should be charged with arborcide.

Travis Antoniello was jailed after attempting to gain access to Mark Zuckerberg’s home via the Metaverse. Antoniello, who was recently named Coal Creative’s Technology Specialist, says he was simply experimenting with the Metaverse. Evidence suggests a premeditated plan to steal the bottle of Sweet Baby Ray’s from the tech mogal’s bookshelf. Antoniello will be arraigned on charges of virtual breaking and entering and grand theft condiment.

Alex Manganella is charged with three counts of speeding on foot. Manganella was  participating in the Love Run Philadelphia Half Marathon (actually true) when he was observed repeatedly breaking the speed limit in multiple residential areas and school zones (likely untrue, but I wasn’t there). The suspect claims he reached his peak of 45 MPH because the new album from The Human Beings was propelling him to cheetah-like speeds. “I’m ready to pay the fine. I encourage everyone to check out the album,” Manganella told police.

The Human Beings — including drummer and Coal Creative employee Matt Simoncavage — have been cleared of any wrongdoing.

Sam O’Connell was jailed briefly on charges of felony handsomeness. He was released after DNA tests confirmed he was not the real suspect: Hollywood hunk Ryan Gosling. Upon his release, O’Connell was defiant, stating “Once again! They mistake me for him!”

Jesse Macko was arrested on one count of terroristic threats with a Nerf gun. The incident occured after the Ryan Gosling Lookalike Championship. Macko was visibly agitated after finishing second to Sam “Once Again” O’Connell. Police apprehended the suspect after he threatened O’Connell with the office Nerf gun. Organizers of the Ryan Gosling Lookalike Championship expressed shock at the near-violent turn of events.

Marleny Encarnacion, is facing three counts of cat calling and two counts of wolf whistling, after an incident at a charity car wash. The suspect seemed to lose control at the sight of shirtless, sudsy dudes.

Will McHale, 33, of Hanover Twp., was charged with dognapping. The suspect claims the dogs jumped into the backseat of his vehicle and “said they wanted to go to Dunkin.” The dogs have been returned to their owners. It is not clear if McHale was able to procure puppuccinos for the stolen animals.

Jon O’Connell is facing charges for brawling and reckless overconfidence after an altercation at a notorious biker bar. O’Connell admitted that despite not belonging in the rough establishment he “low-key started irritating the biggest, meanest-looking guy there.” The biggest, meanest guy in a bar well-known for its tough customers won the fight effortlessly. Both men were arrested.

Adam Roberts, 35, of Clarks Summit, was charged with theft and felony “doing it for the ‘gram.” Roberts, alias @herocksthehats, was apprehended in the New Era Cap Co. exhibit in the Smithsonian Museum with a selfie stick in hand and a rare 1920 baseball cap on his head.

Camaryn Lokuta, was charged with stalking and attempted kidnapping. Police responded to a local grocery store for a report of a small woman ducking in and out of aisles and disturbing other shoppers. Police witnessed the suspect straining to put a bag over a man’s head who vaguely resembled dreamy singer-songwriter John Mayer. While being handcuffed Lokuta was belligerent, claiming she and Mayer were “going to run away together.” The victim reported he had never been mistaken for John Mayer, but was generally acquainted with “that song about high school hallways.”