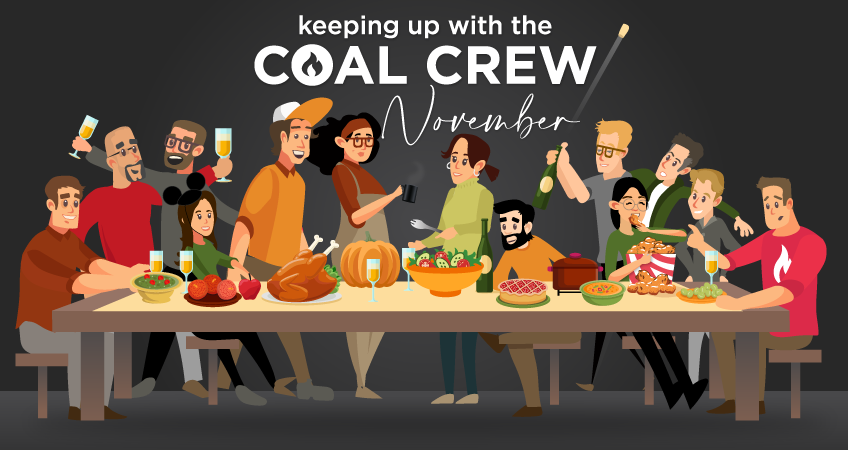 Keeping Up With The Coal Crew | November 2021

Candy canes are on the shelves, commercials are touting Black Friday deals and some members of the Coal Crew are playing the Nat King Cole Christmas album. That can only mean one thing. It’s almost… THANKSGIVING!

There is lots to be thankful for around here, and we love to express our gratitude. As part of our monthly check-in that is “Keeping up with the Coal Crew,” it was an obvious choice to ask the team what they’re thankful for. It’s the most tread on trope of the fall, but we did it anyway.

Here’s the Coal difference: we also asked everyone what they are not thankful for. There’s no doubt that gratitude is good. At the same time, there’s something cathartic about complaining. Join us for a remix of the traditional giving of thanks and the Festivus Airing of Grievances.

Samantha, hit ‘em with your hot take on tea.

“I am not thankful for Earl Grey tea, specifically the bergamot that is hidden inside of it. It’s the one tea I cannot stand,” said Samantha Bucher, Content Manager & Design Specialist. “Look up bergamot on Google Images…”

“and tell me who in their right mind saw this shriveled up reject of a lime and thought to drink it. I can’t even stand the smell of it.”

That does look like  a shriveled up reject of a lime, but I’m not in a position to judge Mr. Grey or his tea.

“Apologies to anyone who truly enjoys Earl Grey, but please, talk to me and I’ll introduce you to so many better teas,” Samantha concluded.

Samantha — like many of us on the Coal Crew — is thankful for her family.

“My parents are always in my corner, my sister makes me laugh like no one else can, and my partner is my best friend. Every holiday season, I treasure the time I get to spend with them,” Samantha said.

“As always, I’m grateful for my incredible family. It’s a remarkable feeling to know that there’s an unconditional support system there for me whenever I need it. I don’t know how I got so lucky,” said Alex, before lodging a culinary complaint that is sure to draw more agreement than Samantha’s feelings about Earl Grey.

“What I’m NOT thankful for: Everything that tastes good is bad for me,” Alex proclaimed. “Tastykake needs to make a multivitamin cupcake. We should pitch it to them.”

Tastykake, consider this our pitch.

Camaryn Lokuta, Operations & Business Development Manager,  sent her thanks from vacation at a packed Disney World.

“I am incredibly thankful for my family. I have a very large family, whom I would not be able to go through life without,” Camaryn said.

“I am not thankful for crowds,” she shared, certainly inspired by her surroundings.

Our team is full of talented musicians. So, not surprisingly, a few of us are thankful for artistic expression.

“I am thankful for music — playing in bands and making music is a blast,” said Web Developer Travis Antoniello.

“I am NOT thankful for music elitism,” Travis continued “JUST LET PEOPLE LIKE WHAT THEY WANT TO LIKE!”

I throw my fist in the air, turn up MY music and look to Post Production Manager Will McHale for his comments.

“This Thanksgiving season, I’m thankful for creative outlets like music making, woodworking, and of course, video editing,” said Will.

“Something I’m not thankful for?” he asked. “The start of the car defrosting season!”

“I am not thankful for my hands being numbingly sensitive to even mildly cold temperatures,” said Jeremy. “I am thankful for the quiet that comes with colder months, as well as hand warmers.”

The thing I enjoy about this blog is the versatility of answers. Let’s give the floor to Creative Director Sam O’Connell, who used this space to troll his current friends.

“As someone who has never really followed sports, I am so thankful that I got to join my first Fantasy Football League this year with our Production Manager Alex and his family and friends,” Sam began.

“That being said, the comradery that I imagined would come from participating, quickly diminished as I began dominating the league with my auto-drafted team. Thus, I must state I am not thankful for the weight of this crown. Although I am comfortably leading this group of 16 strapping young men, I do miss my friends and look forward to the season being over so I can have them back.”

“I am thankful for the ability to change. It’s easy to get bogged down. It’s easy to feel stuck. Things change, though. With supportive people by our sides and a hopeful outlook, we can achieve anything. Adaptability is one hell of an ability. I’m grateful that I’m fine-tuning that skill.”

But of course, I still have a little rant to share.

“I am not thankful for loud noises! Barking dogs and toddler screeches are part of my daily auditory experience. I am eternally grateful for my fuzzy poodles and bouncy son who keep a smile on my face and the decibels up. But silence — as they say — is golden.”

Jay Nguyen, Video Specialist, showed her ability to be in the moment with her response.

“At this very moment on Tuesday, November 9 at 12:21 PM, I’m thankful for Alex going on a lunch run to get us all KFC’s Famous Bowl Combo meals,” Jay said. “I am not thankful for my lack of self control. This is my second Famous Bowl this week.”

Now, we jump from food to literature. I told you the responses are varied!

“Currently, I’m thankful for the book series “A Song of Ice and Fire”,” Lead Web Developer Matt Simoncavage said. “I love a good read in the fall/winter months. I’m a big fan of the “Game of Thrones” TV show so it’s really cool to finally be reading the books it’s based on. They’re great.”Matt then went on to file a very common complaint about the popular book series turned HBO show.

“I am not thankful that George R. R. Martin is taking so long to finish the last two books,” said Matt. “C’mon man!”

Coal Creative CEO Holly K. Pilcavage is a pillar of gratitude. So much so, gently reworded the request for something she’s not thankful for.

“What am I not thankful for? Everything serves its purpose, teaches a lesson, etc.,” Holly said. “It’s hard to not be thankful at all. How about I say what I am least thankful for?”

You’re the boss! Go for it.

“With that said, I am least thankful for the fact that teleportation doesn’t exist to the general public. It would honestly make things a lot more convenient,” Holly explained. “To be able to Willy Wonka myself over to a TV screen in Paris at any given moment? That would be incredible. Someone should really get on this issue.”

Who among us hasn’t been frustrated with the lack of teleportation in the world. Are you on the case, scientists? What about you, mad scientists? Oompa Loompas? Tastykake?

While we wait on Wonkavision, here’s what Holly is grateful for.

“I am thankful for passionate people,” she said. “I truly think they make the world go ‘round.”

To finish things out, let’s go to Jon O’Connell, Director of Strategic Communications, whose green thumb is a gift and a curse.

“I’m thankful for: The pumpkin I’m growing on my desk,” Jon said “Out of curiosity, I took a couple seeds from a pumpkin we carved last week and planted them in a small pot of soil. Then one sprouted. I’m not sure why I’m so surprised.”

“I’m not thankful for: The pumpkin growing on my desk,” Jon countered. “What the heck am I going to do with it?”

I, for one, hope Jon grows a blue-ribbon winning gourd on his desk. Time will tell. As always, I am so thankful to you for reading. Share what you’re thankful for and what you’re not thankful for. We’d love to hear from you, and remember, stay Coal!