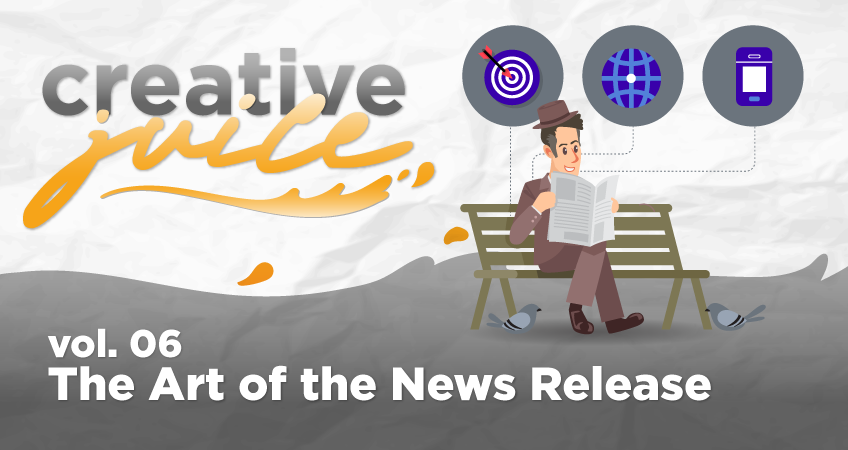 The Art of the News Release

A news release is a simple document with a big job. It’s a common format sent by businesses, organizations and prominent individuals to media outlets from small weekly papers to national news networks. The objective of a news release is to garner interest from your targeted media audience to share with their larger readership.

At Coal Creative, we regularly write and distribute media releases — both on behalf of our collaborators and ourselves. Our Director of Strategic Communications Jon O’Connell has been on the sending and receiving end of many press releases. As a longtime journalist, Jon knows news when he sees it. He also has good grounding in the format and delivery that give a new release its best chance of getting published.

Let’s start with the basics.

What is a News Release?

A news release is a written statement directed toward media professionals like reporters, producers or editors. A news release serves as an official announcement for public consumption.

News releases include important information to entice reporters to write their own stories. The release should have all the basic building blocks a reporter needs with no added fluff.

“It usually goes through several versions before we finally launch it into the ether,” Jon said. “It sucks time. But don’t fret. There are a few tricks to make it come together faster with fewer revisions.”

Before writing a word of your news release, you should clearly articulate what about your announcement is “news.” News is something that happens. News is dynamic. It is a big change, a beginning or an end. Jon points out that sending releases without a real news hook gives the impression you don’t really understand the media’s job.

Use these three questions to help determine newsworthiness:

If you can answer “yes” to these questions, it’s likely that you’ve got real news on your hands. If you have a “no” or two, you may be able to reframe your story or present a different angle that will make your release more appealing for news outlets to cover.

Use this graphic to help determine what is newsworthy.

Your template should represent your business with the logo on top. You should select fonts and colors that jive with your brand. It’s best practice to end a press release with a boilerplate.

A boilerplate is a summary about your organization. It is the basics of who you are without much of the narrative that is covered in the news release above. 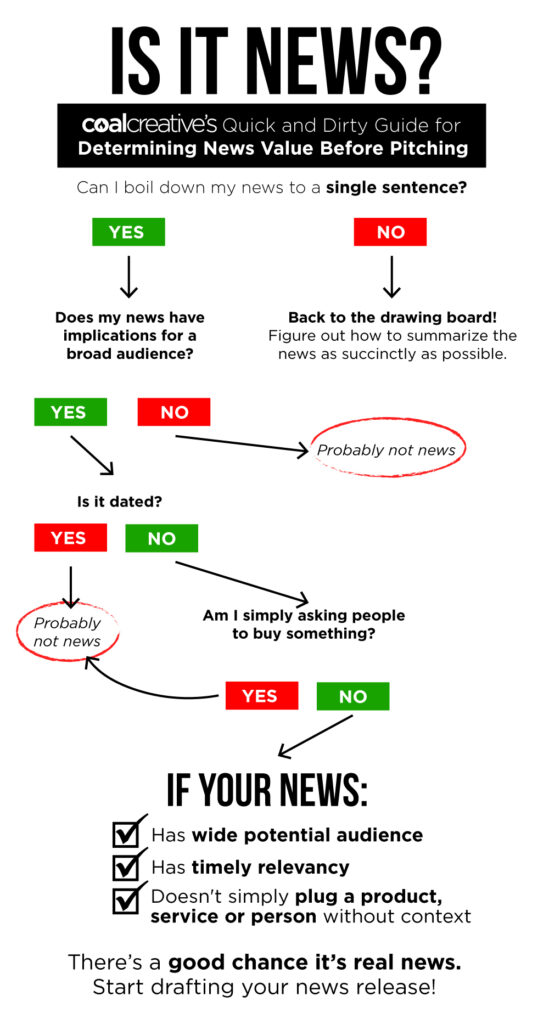 When you start to write a press release, keep in mind that you are providing information, not writing the whole story. Your goal is for a reporter to latch on to the idea and get curious so they want to flesh it out. With that in mind, you want to cram as much important information into a well-organized package as possible.

Your paragraphs should be compact and full of useful tidbits. A press release should be contained to one page, unless there is a very compelling reason to make it longer.

“Start with your introduction sentence,” Jon said. “Aim to answer the who, what, where and when in two lines or fewer. That’s your first paragraph. If you go over two lines, answer fewer questions and break to a second paragraph.”

The next paragraph should explain the why with additional context.

Follow that with a quote from a relevant source. Jon advises using something short and sweet.

Next, “Add any more context and explain why this is relevant on a larger scale, for example how it fits into a broader trend,” Jon said. “News outlets love trends.”

Jon suggests quoting a second person here who can speak as a witness. Incorporating another outside source adds credibility to your newsworthiness argument.

Wrap up your news release with the second quote or add any supporting information.

A press release is usually used as a jumping off point for a story. There are times when editors will print news releases as is. Employing a structure that mirrors journalism’s inverted pyramid will help. This is the idea that the most important information should  be at the beginning — picture the fat part of a triangle up top with the less relevant details making up the tiny tip of the pyramid.

I was told in journalism classes that an editor should be able to draw a line anywhere in a story, cutting it off below the mark. A well-written story will still make sense because the important stuff is close to the beginning. A news release should follow that mindset.

As we’ve discussed, writing a news release is an exercise in wooing a reporter into covering your story. Your job doesn’t end when you press send on the release. You’re angling to be interviewed, so be ready!

The news release should have contact information. Be sure to include your phone number and email if you’re the business owner or primary source.

“Reporters are usually very busy and have a lot of people pulling them in many directions,” Jon said. “Show some courtesy and respect for their time by providing a foolproof way to reach you.”

Once you pick up the reporter’s call, make sure you’re equipped with all the details they’ll need, including contact information for additional sources.

Please reach out if you’d like to speak with Jon about press strategy or work with our team to craft your news release. Use the form below to get in touch. Don’t forget to stay Coal!