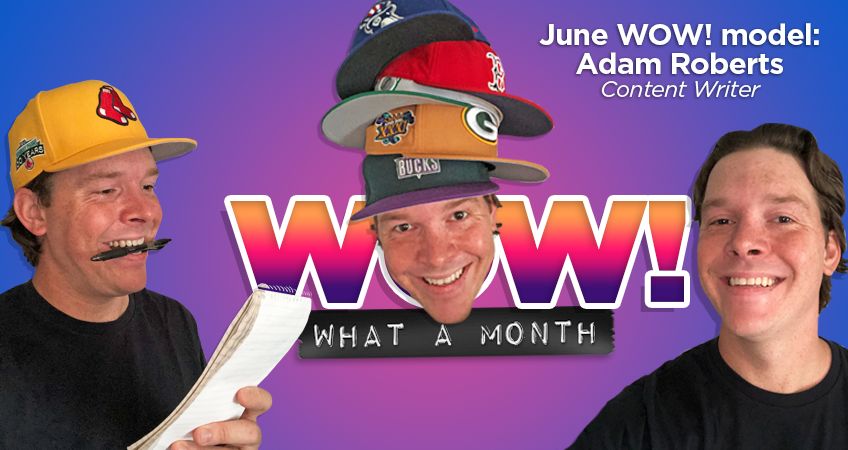 June was a busy and wonderful month. We enjoyed celebrating Pride Month with our LGBTQ+ friends and seeing so many other folks at local events. Follow us on a look back on the month from the EPIC Awards to Leadership Wilkes Barre and PrideFest to NEPA Sings. Wow! What a month it’s been!

The Coal Crew has been missing a piece since the pandemic stunted our internship program last spring. Life took a huge step back to normal this month as we welcomed our first summer intern in more than a year.

Vic Fini joined the team as a Social Media Intern. You can learn about Vic’s aspirations, her job description and why no one wants to take on Coal Creative in a softball game, here.

The Coal Crew was represented on stage, on screen and in the audience at the  2021 EPIC Awards on June 8. The event, which was virtual last year, marked a return to in-person celebrations.

The program was full of work by Coal Creative. Our team created the tone-setting videos that introduced the honorees and brought our vibrant community to the jumbotron. Our design work was dappled around the area in graphics that flashed on video boards and circled the upper deck.

Coal’s contribution to the night wasn’t just on screen. Several team members handled the pre-show scheduling, coordinating and management that makes up what Holly rightfully dubbed “the behind the scenes magic, AKA chaos.”

There were no signs of chaos during the polished evening. The program brimmed with gratitude that we were in the same room. The same was true at Coal Creative’s table of eight.

“It was my first time hanging out with the Coal Crew outside of the office and I had a blast,” said Jay Nguyen, our Video Specialist who joined the team just in time to work on the EPIC videos. “When my work displayed on the screen, I went through a lot of emotions at once! I felt mostly thankful for the help of the team for bringing those videos to life.”

NEPA Creative’s June Meetup was co-hosted by NEPA Rainbow Alliance and celebrated LGBTQA+ community members in honor of Pride Month. Thirty-five people gathered in Kirby Park  for three unique breakout sessions. Attendance was back to pre-pandemic levels, a sure sign that the yearlong layoff hasn’t dampened the spirit of NEPA’s creative class.

“We are so fortunate to have this community that chooses to get engaged and try new things along the way,” said Holly, Coal’s CEO and NEPA Creative’s co-founder. “We are creating something extremely special here and it isn’t possible without every single person choosing to show up and be a part of something larger than themselves. I am just all around grateful.”

The sessions included abstract painting and poetry writing, hosted by Nikki Berlew and Alyssa Duffy. There was also a drag performance followed by a discussion about gender, led by Anne Wolfe/Andrew Oddgenus.

NEPA Creative will be back at Kirby Park on July 20th at 6PM for its monthly meetup.

Visit the NEPA Creative Facebook page for more information as the date approaches.

NEPA Rainbow Alliance had a full month of events around the region for Pride. The month culminated in 2021 NEPA Pridefest: Live Out Proud.

This year’s Pridefest was a microcosm of the times, having been planned as a virtual event. The hour-long broadcast, created by Coal’s video team, was broadcast on the Rainbow Alliance’s Facebook page. But thanks to loosening restrictions, there were four watch parties that brought the community physically together.

Ole Tyme Charley’s Pub & Grill in Plains, The V-Spot in Scranton and the Vesuvio’s in Wilkes-Barre and Drums welcomed revelers and shared the broadcast.

Holly and Sam O’Connell, our Creative Director, are deeply involved with the NEPA Rainbow Alliance, serving as board members and co-marketing chairs.

While PrideFest was the crown jewel of the month, the organization hosted an awesome range of Pride events. They held several Pride flag raisings around the region and the Mr. and Mrs. PrideFest pageant among other things.

We’re grateful to be involved with this group of advocates and to celebrate the incredible LGBTQ+ community in NEPA.

Coal Creative had a passing of the torch at the Leadership Wilkes-Barre graduation dinner on June 10. Sam was honored as a member of the class of 2020. Camaryn Lokuta, Business Development Manager, will take the mantle when the 2022 class kicks off on September 9.

Camaryn is excited to join Sam and so many others who have participated in Leadership Wilkes Barre.

“I have heard that you learn incredible things through this program and I am extremely eager to be a part of such a prestigious organization,” Camaryn said.

An invitation to a virtual meditation class has spurred a healthy new habit around here. Our friends at studio BE held a centering meditation class at noon on June 14. The 15-minute session was attended by several Coal team members, both in the office and remotely. Since then, several of us have taken advantage of studio BE’s live classes, including Zumba, as a mental reset.

“Agency life — CEO life even — is a wild ride. Every day is full and fruitful,” Holly explained. “Any opportunity to slow down, even for a short spell, is useful in ensuring I am actually present in my day.”

You can sign up for a 14-day free trial at studio BE, gaining access to their meditation, yoga and other classes, at their website. If you attend the 12PM centering meditation, you may be among friends from Coal Creative.

Holly and Camaryn stepped into the tee box on June 18 at the Wyoming Valley Country Club. They both ventured onto the golf course for the first time for the Women in Business Free Golf Program.

“I was nervous going in because I have heard that golf could be a frustrating sport, but I had a ton of fun and learned A LOT,” Camaryn said.

Boost Business NEPA, a collaborative initiative to help businesses impacted by the pandemic, launched it’s 20-day Spread the Love Campaign on June 1. The campaign collected and matched donations for local small businesses with less than 20 employees.

The winner of the Fourth Annual NEPA Sings competition was crowned June 24. Last month, the Coal Creative video team filmed the 10 finalists’ performances at the THINK Center. The show was broadcast on YouTube and at the Garden Drive In in Hunlock Creek. Viewers, both online and at the drive-in voted on the winner. Several team members attended the viewing party. NEPA Sings benefits Court Appointed Special Advocates (CASA) of Luzerne County.

The Coal Crew whipped up a playlist perfectly designed for summer. We’ve got you covered for all your road trips and beachside beverages with this eclectic and totally coal set of songs.

So, roll down the windows, crank up The Wallflowers and alway stay coal!