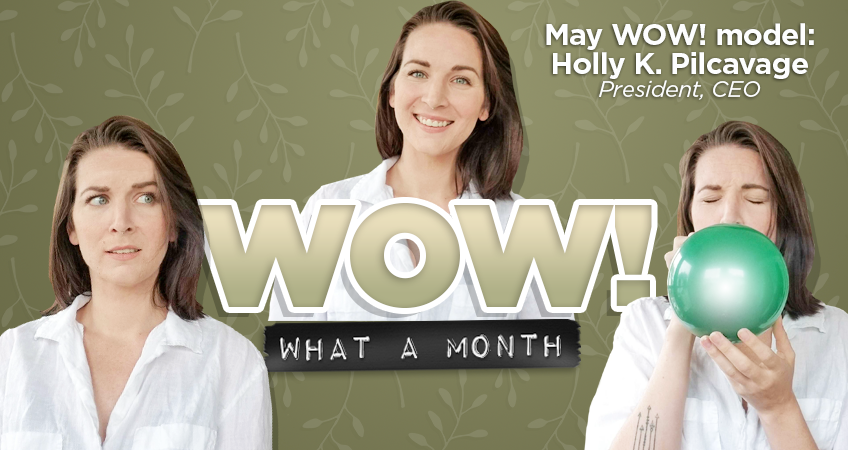 Posted by Adam In Blog,What A Month 0 Comments

Let’s review May at Coal Creative. We celebrated two important birthdays, expanded the team and made many videos for NEPA events. Wow, What a Month it’s been!

May is Coal Creative’s CEO Holly K. Pilcavage’s birthday month. The month-long celebration culminated with her birthday on May 30.

“I’m stoked for another trip around the sun,” Holly said. “Thirty-one feels like it’s going to be the best year yet.”

Matt Simoncavage, Lead Web Developer and Designer, deflected a little shine on May 18 when he marked his 30th birthday.

Another month, another addition to the Coal Crew. We welcomed Video Specialist Jay Nguyen to the team. Jay earned a Digital Media and Broadcast Production degree from Marywood University. She is an exceptional visual storyteller with a deep bag of videography skills.

Jay jumped right in to shoot and edit some of the videos we’ll expand upon below. Welcome to the team!

Jay joined us in May, and we’re still growing. Coal Creative is hiring a Social Media Specialist. The right candidate is a passionate social media expert with a knack for strategy. If you are excited about guiding social media campaigns from idea through execution, then apply today! Please send your resume and relevant samples to Business Development Manager, Camaryn Lokuta, at camaryn@coalcreative.com

For the third time, Coal Creative participated in a panel discussion at Wilkes University’s Tom Bigler Journalism and Media Conference. The conference, which was held virtually on April 30, is for high school students interested in media careers.

“A lot of them believed a path into a communications or media career was rigid (you have to major in the right thing or you are out of luck), so it was really cool to show off our own non-linear paths and how we got to Coal,” Samantha said.

Jeremy, who described himself as a fairly unmotivated student was encouraged by the communications pros of the future.

“I was taken aback by how professionally-oriented all of the students’ questions were. It was great energy to be around, and it filled me with hope,” Jeremy shared.

The series was geared toward small business owners and walked through the process of building a web presence.

“While I am personally used to these types of discussions and presentations, it was really exciting to see Travis and Samantha in their element, with their incredible expertise on display,” Sam noted.

Equality is part of who we are at Coal Creative so two of us jumped at the chance to gain more knowledge this month. Holly and Camaryn completed the Diversity, Equality and Inclusion in the Workplace Certificate through the University of Southern Florida.

“I would say it really caused me to self-reflect and determine that there are ways that I still have a discriminatory mindset,” Camaryn admitted. “I have learned to reframe my thinking and always be mindful moving forward!”

The 14-hour online seminar was spread over seven weeks. It focused on creating a diverse workplace addressing equality issues and promoting inclusivity. Holly saw the program as a way to foster human connection.

“This particular certification brought important topics to the table so that we, as humans and leaders, can better understand different perspectives and experiences,” Holly explained. “The more I can learn, the better I can be to help others around me — especially at Coal Creative — show up as their authentic selves, without fear, and surrounded by genuine support.”

On May 7 — or 5/7 — Coal Creative joined many organizations in the area code to celebrate all things 570 on #570Day. The social media campaign, which highlighted the region, its people and businesses was organized by the Rotary Club of Wilkes-Barre, Visit Luzerne County and the Wyoming Valley Chamber. It was a day for NEPA boosters to proudly tout our home.

“I absolutely love the concept of #570day and cannot wait to see what it grows into over the next few years,” Holly said. “As a cheerleader for all things 570 the last few years, this was a super easy YES for me to get behind!”

The effort to stoke local pride was embraced by tons of local businesses and groups. A few members of the Greater Wyoming Valley Chamber Elevate Young Professionals Network, including Holly and Sam from Coal, ventured to Pinchot State Forest in Thornhurst Township for an early morning hike.

Holly, the Young Professionals Network Chair, used the early alarm to strengthen a recent commitment to embrace being a morning person.

“I saw the 5 a.m. wake-up call for the hike as a challenge and opportunity to push myself to break down some of my own personal barriers and limiting beliefs about what type of person I am and can ultimately be,” Holly said.

The 2021 EPIC Awards are set for June 8, but the preparations have been underway for some time. The annual event that honors individuals, organizations and community programming is presented by the Greater Wyoming Valley Chamber.

The event will be hybrid virtual and in-person at Mohegan Sun Arena at Casey Plaza. To cater to the socially distanced crowd at the arena and online viewers, the Coal Creative Video Team has conducted dozens of interviews. The video testimonials will highlight the professionals, innovators and volunteers being honored.

Register for the 2021 Epic Awards here.

After the COVID-19 pandemic halted meetups for the past 14 months, NEPA Creative reunited for their monthly gathering of local creatives on May 18. NEPA Creative was co-founded by Coal’s very own Holly and Sam as a way to highlight creatives and eventually bring them together for events.

The painting and planting breakout session was led by Holly and Tatum Neiderhiser. Attendees got to paint a pot and plant a cutting. While the activity was the hook, the return to in-person connection was the best part.

“It’s so important to foster community, especially around the things we’re passionate about,” Holly said. “Creativity doesn’t start and end inside the walls at Coal Creative for me. Creativity fuels the arts, culture, and overall heart of the communities around us.”

NEPA Creative meets the third Tuesday of every month, The next event is June 15 at 6 p.m. at Kirby Park. The meet-up will center on the LGBTQ+ community and allies coming together to celebrate Pride Month.

The new maplehillcemetery.org launched this month. Coal Creative partnered with the Maple Hill Cemetery Association to redesign their logo and website to coincide with the Hanover Township cemetery’s 150th anniversary.

Lead Web Developer and Designer Matt Simoncavage explained that the web team set out to unite the past and present with the logo. They used characteristics from the logo throughout the web design.

The beauty of the Maple Hill was the guiding aesthetic of the new site.

“The Maple Hill website uses a lot of imagery to show how nice the grounds and facilities look throughout the seasons, within easy to navigate and informative pages.”  Travis explained.

“We filmed in early May as the trees were blooming. It was a great way to kick off the new season with some fresh air.”  Alex Manganella, Production Manager said.

The talented finalists of the Fourth Annual NEPA Sings took the stage at the THINK Center on May 20. The Coal video team was on-hand to capture the 10 performances. Editing is underway. For the second year, Coal is producing the virtual competition.

This year, the organizers integrated an in-person component, recapturing some of the energy of the first two NEPA Sings. A viewing party at Garden Drive In in Hunlock Creek on June 24. The gates open at 7 p.m. and the show starts at 9 p.m.

“During the event, the audience will be able to text their vote for their favorite performer, and the fan favorite will receive their own special prize,” Post-Production Manager Will McHale added.

The Royalty of NEPA Pridefest held a rousing event May 23 at Act Out Theatre in Dunmore. Organizing and hosting was done by Ms. NEPA PrideFest Trixy Valentine and Mr. NEPA PrideFest Justice Twist-Valentine. A range of talented performers wowed the Sunday night crowd. The event raised $676 for NEPA Rainbow Alliance.

Sam and Holly, who is a board member of the NEPA Rainbow Alliance, were among the revelers at the joyous and sometimes emotional show.

“I want to celebrate with the members of the community as an ally and encourage others to do the same,” said Holly. “Attending an event, like this pageant, is one simple way to do that.”

Each year, the Institute for Public Policy and Economic Development in Wilkes-Barre facilitates the Indicator Project, which tracks progress in the region over time. The indicators essentially capture quality of life in the area by measuring public health, housing, economic development, public transportation and infrastructure, labor market and energy.

Brandon’s Forever Home hosted its monthly virtual discussion about fostering older children on May 26. Each month Director, Lori Ogurkis and Executive Assistant, Missy Nenstiel answer questions and provide insight. If you missed the discussion in May or any previous event, you can view the video on Facebook.

Members of the Coal Crew participated in a regional networking crossover event on May 27. The Greater Wyoming Valley Chamber Elevate Young Professionals Network, chaired by Holly, held an event with the Schuylkill Chamber of Commerce Young Professional Network. The collaborative event brought together young professionals from two similarly aligned groups.

Holly gave us all the last day of May off to celebrate her birthday. Oh. Scratch that. I’ve just been informed it was for Memorial Day.

Regardless of the holiday, the Coal team got a well-deserved break.

On Tuesday it all begins again. We’ll see you next month to recap a busy June…until next time stay coal!