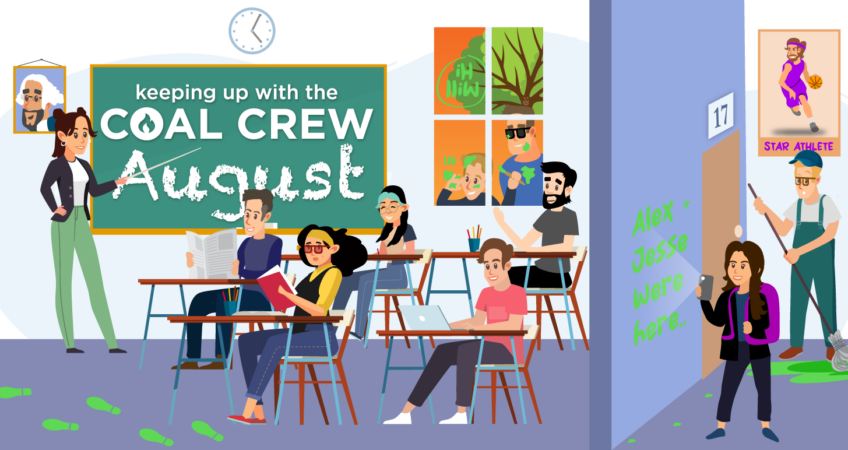 As any parent will tell you, school should be starting any day now. That got us thinking about a different kind of back to school.

We were wondering — given the chance — what the Coal Crew would do if they could follow a different career path.

It became apparent pretty quickly that this question was dreamed up by folks who have been out of college for a while.

Camaryn Lokuta, who just celebrated two years as our Operations and Business Development Manager, was at a loss.

Production Manager Alex Manganella took the question as a chance to add another set of skills to his existing film and media arts degree.

“If I went back to school it would be for finance,” Alex said. “There’s so much to learn in that world and there’s a business side to most creative endeavors. The knowledge certainly wouldn’t go to waste.”

Our CCO Sam O’Connell, who in real life built up Coal Creative’s video department, imagines a future where filmmaker Sam adds an ostensibly unrelated degree to his resume.

“If I went back to school I think it would be to study Zoology, so that I could fuse my love of animals and animal documentaries like Planet Earth and Frozen Planet and filmmaking,” said Sam, who voraciously sought out nature shows as a kid despite not having cable at home.

But what if you could try something totally different?

Camaryn, Alex and Sam elected to keep their current experience and perhaps add something extra. The rest of us took this assignment as a chance to imagine a totally different reality.

I (Content Writer Adam Roberts), have a degree in communications that is equal parts journalism and marketing. As such — since graduating in 2009 — I’ve been a reporter, an editor and a marketer.

With the scars of corporate America (a venture capital takeover, the complete dissolution of a marketing department and an unpaid “internship” more than five years post-graduation) still fresh, I have no problem conjuring an alternative universe.

A few years ago, I would have said I’d go to film school. A path that coincidentally could have gotten me to Coal Creative, but with a different title and daily tasks.

Now, I would go back to school for fashion design. I think it would be cool to learn the philosophy and theory that drives fashion along with the tangible skills it takes to turn a few yards of fabric into an outfit.

What if you could cook up a new career ‘from scratch?’

Coal’s CEO and President Holly K. Pilcavage went in a similar direction, turning an interest into a theoretical career.

“While I love my weird non-linear path in this beautiful life, if I could go back and start fresh, I’d go to a culinary school,” she said. “I love cooking from scratch and I absolutely love plating.”

Holly is a person of vision. Here’s how she sees her culinary career:

“I’d grow what I could and partner with local farms to make delicious dishes in my super popular, reservation-needed restaurant and every plate would wow the guests. ‘I don’t even want to eat this. It’s so pretty.’ would be heard every day, multiple times a day.”

While chef Holly tweezes and sauces her way through a parade of perfect plates, Post-Production Manager Will McHale imagines the life of a craftsman.

“If I could go back to school, I think I might enjoy learning a trade, or some kind of work with my hands,” Will said. “I’ve always been into woodworking and music as hobbies. So, I’d probably choose to learn luthiery, which is the building and repair of stringed instruments. Everyone in the family gets violins for Christmas this year!”

At least one of us would shoot for the stars — literally

Travis Antoniello went back to his childhood interests for his new academic route.

“If I went back to school, I’d go for astronomy and astrophysics,” our Web Developer and Technology Specialist said. “It’s an exciting time for astronomy with the recent launch of the James Webb Space Telescope and I’d love to be a part of this new frontier.”

Travis has been interested in space since he was a kid. His knowledge on the subject has grown up with him thanks to PBS Space Time and more recent discoveries of YouTubers like Dr. Becky and Anton Petrov.

Like his fellow web developer, Matt Simoncavage took inspiration from his childhood interests.

Yet others would try something that once intimidated them

“When I was little it was my dream to someday become an architect and design cool buildings and houses,” Matt said. “At some point, I remember someone telling me there was a lot of math involved in that and it scared me away because I hated math.”

“My dream career then changed to fine art and then to animation until I discovered the worlds of graphic design and web development. Now, I can’t imagine doing anything else!”

Content Director Samantha Bucher is also satisfied with the pivot that brought her to marketing. But forced to choose, she’d work the animals.

“I love that my path took me here, but if I had to go back, I’d love to study something with animals,” Samantha said. “I actually started my college journey wanting to be a veterinarian, but that path wasn’t for me. So, I’d probably go back and study zoology or something similar.”

Jon O’Connell, Director of Strategic Communications, was also drawn to nature, but not  the kind that walks, flies or slithers.

“This is a tough one, but I would get a degree in forestry,”  Jon said, before picturing life as a landscaper and lamenting a real-world issue that would be an easy fix for a forestry professional.

“I think that’s because in another universe, I run a successful landscape architecture and tree service company, and some cosmic force is thanking me for excellent, responsible forest management,” said Jon. “I probably also say that because in this universe, I’ve got invasive sumac trees in my backyard and I want to know how to get rid of them.”

While Jon’s answer was influenced by the plants that surround him at home,  Jesse Macko picked a new major based on the people he’s surrounded by at work.

“I would go back to school for art!” our Social Media Specialist said. “Not because I’m good at it, but because I’m surrounded by so many talented artists in the office that I want to be able to compete!”

“It’s an in-demand skill at the moment, and I like using design to guide people through documents and interfaces,” Jeremy said.

Jeremy admits that he steered clear of UI/UX design for the same reason he’s now enticed by it.

“There’s a research component with UI/UX that used to be intimidating when I was younger, but appeals to me more and more as I get older.”

And one of us read the assignment — differently

We’ll end this month’s “Keeping Up With The Coal Crew” with Jay Nguyen, our Video Specialist.

Jay had a slightly different read on the prompt, “If you could go back to school, what would you go back to school for?” While most of us took the question to mean, “What alternative degree or career would you pursue?” Jay focused on going back — in time — to her school days.

“I would go back in time to spend more time with my best friends!” Jay shouted. “We went to middle school and high school together and were practically joined at the hips!”

Now that some of us have full-time jobs or continuing higher education, it can be difficult to get together. But when we do, it’s like we never left each others’ sides.”

Buckle up and enjoy the ride!

It’s common to look at the schools we attend as the roads we took to our first job. That job can become a career — or a highway — with a defined direction. The highway has exits, detours and other superhighways that shoot off in unexpected directions.

Alternatively, “school” is a real place where we spent many incredibly formative years. While this blog mostly paints new realities of Michelin Star dining and immaculately manicured grounds, there’s something sweet about imagining your best friend’s laugh breaking through the din of your crowded high school cafeteria.

No matter where you are on the roads of life, the people riding shotgun make the ride a lot more fun. Buckle up,  turn up the radio and always … stay Coal!