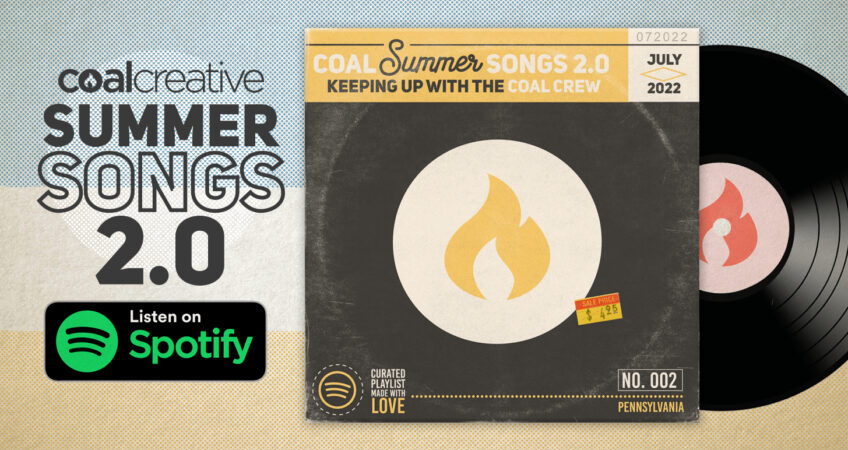 Here at Coal Creative, we dig a good collaboration. That’s why the Coal Crew teamed up for Coal Summer Songs 2.0. We had so much fun making a summer playlist last year, we decided to run it back in 2022.

Playlists and their predecessor the mixtape are embedded in our culture from movies to our teenage inclination to dedicate songs to a crush. You can find a slew of articles with tips on curating and creating the perfect playlist, including this one from the New York Times.

Spotify’s Meg Tarquinio told the Times that the best playlists start with “an eccentric and eclectic idea and go from there.”

We asked each member of the Coal Crew to share a song that gives them summer vibes with a little description of why they picked it. On the surface, “summer vibes” isn’t all that eccentric, but it turned out that way when placed in the hands of our team.

Our submissions included “reggae-infused EDM,” a pop power ballad and a dose of “sweet atmospheric western twang.” That sounds pretty eclectic — and eccentric — if you ask me.

Armed with 14 summer songs, I set out to put them in some kind of order.

Bobby Carter — a DJ and the producer of NPR’s Tiny Desk series — offered insight into the playlist game in this NPR article. Carter says a playlist is like a flight. You take off, then settle in for the duration before coming down to land.

Following that analogy, please find your seats and prepare for take off. We expect a bit of turbulence caused by sick beats, but we’ll be arriving on time for chill vibes. We hope our playlist will empower, fuel your cleaning sprees and give you plenty to listen to while cruising with the windows down. Thank you for choosing Coal Air.

It’s time to take off.

Chief Creative Officer Sam O’Connell’s song gets the pole position on the playlist by virtue of being the only song with the word “summer” in the title. Sam picked “All Summer Long” by Josiah and the Bonnevilles and he gets bonus points for not picking the unrelated song of the same name by Kid Rock.

“Growing up — like many other American families — we watched American Idol every week. In 2007 Josiah Leming was in the top 24 and was a clear favorite amongst myself and my siblings. When he was shockingly voted off we were outraged,” Sam explained. “Fast forward 15 years and he’s still at it making great music. ‘All Summer Long’ is the perfect song for being outside and it takes me right back to spending quality time with my favorite people.”

Holly K. Pilcavage, our CEO and President, chose Emmy Meli – “I AM WOMAN.” Again, not to be confused with the song of the same name by Helen Reddy. The 1971 song is a bonafide anthem, so there’s no bonus points for leaving it off.

“I first heard a clip of this song when this TikTok video crossed my feed. Perhaps cliche and perhaps not everyone’s jam, but that’s the point I suppose,” said Holly. “I’m very much in the season of becoming more myself, loving every version of me, including my body, my mind, my past, my present, my hopes, and my dreams. There’s a lot of heavy things happening these days so it’s taken on more of an empowerment tune in my life than a summer jam, but it still makes me bop in my seat when it comes on so let’s just say it counts.”

Now that your head is bopping, you’ll notice we’ve reached cruising altitude. “Steal my Sunshine” by LEN, submitted by Lead Web Developer and Lead Designer Matt Simoncavage is next up.

“It’s one of the best one hit wonders of all time,” Matt said. “It literally sounds like a sunny day.”

Instead of reaching back to the 90s, Samantha Bucher, Content Director, went with a modern band she recently discovered.

“I’ve been jamming out to ‘Talk It Up’ by Sammy Rae & The Friends for the past month,” said Samantha. “My best friend introduced me to this band because my name is also Sammy Reigh (different spelling).”

Kudos to Samantha’s friend for finding a band with a great name and excellent summer grooves.

“‘Talk It Up’ is so upbeat and makes me want to jump out of my seat and dance every time I hear it,” Samantha said.

As we settle in at 35,000 feet, we take a brief moment to discuss different kinds of summer hits. Of course there are the songs to dance to and cry to. There’s also the songs that beg to be screamed along to. (see Don’t Stop Believin’).

Let’s throw it over to Social Media Specialist Jesse Macko.

“The song I picked was Lady Gaga – ‘Hold My Hand.’ Not only is it the perfect song to end the new ‘Top Gun’ movie, it’s also the best song to shout with your friends after a fun summer evening!”

Now, we’ll move from pop royalty to one of the aforementioned “eclectic” selections from Travis Antoniello, our Web Developer and Technology Specialist.

“Here’s some reggae-infused EDM for summer drives,” Travis said, of “Give It Up” by Knife Party.

“Give It Up” serves as a fast-paced intro to “Crystals” by M|O|O|N, chosen by Jeremy Brown, Project Manager. At this point, we’ve definitely increased our beats per minute.

“I listen to this and the rest of the Hotline Miami soundtrack when moving house or doing intensive house cleaning tasks,” Jeremy said.

After intensive cleaning, you might want a “cold and sizzling” cola. Jon O’Connell, Director of Strategic Communications, delivers that with a little downshift.

“I’m going with “Bane” by alt-J. I recently discovered these guys in earnest. They’re very fun,” Jon said. “‘Bane’ is all about sipping cola by the pool, swimming and doing lots of flips underwater. It starts with a sweet atmospheric western twang. I imagine myself popping on a pair of sick aviators, with a long piece of grass in my teeth, and then turning my back to walk up a dusty midwestern highway into a sunrise.”

Here, we shift back into gear and hit the road with Video Specialist Jay Nguyen.

“This is a great song to add to your summer road trips,” Jay said of Two Door Cinema Club – “What You Know.”

The next guest DJ on our playlist is new to the crew. Frank Kocsis is our summer web and design intern. Frank is a drummer, who on his first day at the office shared he’s a huge fan of Rush. Not surprisingly, Frank submitted “Red Barchetta” by Rush.

“It’s a song about uncovering an old car and taking it out for a joy ride. This song makes me want to roll all the windows down and go for a long drive through the countryside. If I had my own Red Barchetta, I would take it out every day,” said Frank.

From 1981, we move to a song released in 1985 that is seeing heavy airplay in the summer of 2022. “Running Up That Hill” by Kate Bush was prominently featured in season 4 of Stranger Things.

“If you do not know why, we are not friends! LOL,” said Camaryn Lokuta, Operations and Business Development Manager.

Since I, Content Writer Adam Roberts, write these blogs, I have the advantage of seeing everyone’s song and explanation before I have to pick my own song. This playlist hits across the genre spectrum — but until right now — there has been no hip hop.

I picked this piano-sample driven track because for a song release in 2022, it feels nostalgic. I have plans to see Logic in August. I’m looking forward to enjoying this song outside on a nice summer night.

Turning back to our flight analogy, this playlist is now entering its initial descent.

Our new Graphic Designer Missy Nenstiel is also making her “Keeping Up With The Coal Crew” debut. Missy shared another great song to cruise to in “Blunderbuss” by Jack White.

“My husband and I took a summer road trip to Tennessee and this song reminds me of that time, driving with the windows down through fields of corn and grain with the sun shining,” Missy said.

To land this plane, we turn to Production Manager Alex Manganella with “Feelin’ Good Again” by Robert Earl Keen.

“It feels like love seeping into every aspect of your life,” Alex said. “I think it’s a perfect song.”

And thus concludes our 2022 summer playlist, because even the experts couldn’t have offered “the perfect song.”

Have a great summer, turn up the volume and remember … stay Coal!