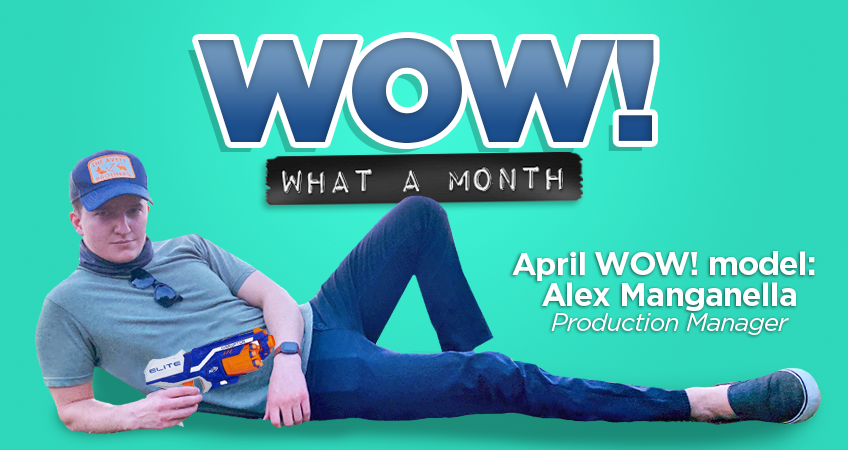 Looking back on the month of April, it’s easy to draw comparisons to a lumbering bear emerging from hibernation. We’ve been cooped up, but the sun is shining and we’re ready to get out there. Community events are happening, both in-person and virtually. The Coal Creative Team was there, and Wow What a Month it has been!

The popular NEPA Sings event, which benefits Court Appointed Special Advocates (CASA) of Luzerne County, kicked off this month with virtual auditions. Sam O’Connell, Coal’s Creative Director and a musician himself, put on his tightest V neck and joined the judging panel. Well, maybe he didn’t dress like Simon Cowell, but he stepped into the cantankerous TV personality’s world for a few hours.

Nearly 40 contestants performed a cappella songs over Zoom for the judges. That group was whittled down to 10 finalists, who will compete for the title. The NEPA Sings event will again be produced by Coal Creative.

“This year’s contestants are a talented bunch and I literally have no idea who will take home the prize. They are all that good,”  said Sam, who was named Cultural Ambassador of the Year at the 2020 Young Professionals Awards. “That being said, there were certainly a few contestants who auditioned who did not make the cut. Insert Simon Cowell Eye Roll.”

Simon Cowell jokes aside, the 4th annual NEPA Sings competition is poised to celebrate the broad musical talents of our region. While it was originally held as an in-person evening, COVID-19 changed the event last year. The 2020 edition was retooled to follow CDC guidelines. That meant our video production team was asked to film, mix, edit and stream the virtual finals. The end result was a show that rivaled the national singing competitions. You can watch last year’s show here.

Coal Creative is producing NEPA Sings this year with a new twist. A viewing party at Garden Drive In in Hunlock Creek is set for June 24 at 7 p.m. Fans can now watch the singers on the big screen from the safety of their own vehicles. Tickets will be available soon.

Our video production team helped the Family Service Association of NEPA bring the 125 Anniversary Spring Fling into people’s homes. Instead of the traditional in-person fundraiser, guests were treated to a take-out dinner and a virtual video event. You can watch the Spring Fling, here.

FSA recognized the Thalenfeld family with the Legacy Award. The family, which runs Trion Industries, has been closely involved with the organization for three generations. Trion Industries co-founder, the late David R. Thalenfeld led the capital campaign to purchase the FSA’s downtown Wilkes-Barre building. His son John Thalenfeld, Trion’s president, joined the board in the mid-90s, serving three terms as chairman. Adam Thalenfeld joined the board in 2019.

While the participants were remote, the event was still a big success. It raised $121,447 to support FSA’s services and mission.

While it took nearly an extra year, the Greater Pittston Chamber of Commerce was able to hold it’s 100th Anniversary event earlier this April. The socially-distanced Roaring 20s celebration took place in the Aviation Technologies Hangar at the Wilkes-Barre/Scranton International Airport.

In attendance were our CEO, Holly Pilcavage and Creative Director, Sam O’Connell.

“Our local chambers are an important cog in building and supporting our region and it was an honor to celebrate such an incredible milestone that night,” Holly reflected.

As noted in the stories above, virital events have become a huge part of our lives. One monthly happening is the Brandon’s Forever Home Monthly Virtual event. Director, Lori Ogurkis and Executive Assistant, Missy Nenstiel have been hosting virtual discussions about foster care, adoption and fostering via Zoom. These informal conversations allow any one with questions about the system to interact with two real experts. Watch the April meeting, here.

Have video gear, did travel

“Their family was incredibly easy to work with, and we feel really great about the video we’re putting together,” Alex said, from on location in Atlanta.

The video will highlight Quantum Rehab’s Stretto Power Wheelchair by way of telling Morgan’s story. We’ll be sure to share the finished product when it’s released.

If you’re a byline reader like me, you might be puzzling over the new name at the top of this blog. I’m Adam Roberts, Coal’s newest Content Writer. As the title suggests, I’m here to write. I’ll pen social media posts and blogs for our clients as well as for the Coal Crew. I’m excited to get to know our collaborators and my new teammates as we all strive to tell the best stories we can.

I’m an Abington Heights and Lock Haven University graduate, who spent the last 10 years living in the Boston suburbs. As much as we loved the access to the Atlantic Ocean, Fenway Park and the innumerable cool things to do in New England; it was time to return to NEPA. My wife, Liz, son, Eddie and two Standard Poodles, Kady and Dexter, are so excited to be closer to family, friends and now my new coworkers.

Well, that’s a wrap on another amazing month at Coal Creative… until next time stay coal!